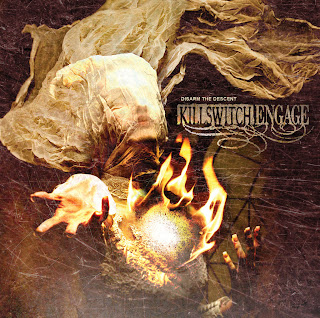 Whether you know them from their landmark albums Alive Or Just Breathing and The End Of Heartache or are more familiar with the short shorts and cape wearing on-stage antics of their lead guitarist Adam D, it only seemed fitting that the first review gracing our "Sounds Known" section would be from the extremely well known Killswitch Engage.  With Howard Jones gone and their original singer Jesse Leach back at the helm, these metalcore veterans return with their sixth full-length album, Disarm The Descent.  This latest offering brings a very welcome breath of fresh air to the band's discography and quite arguably some of the best tunes they've dished out since the aforementioned landmark albums.


It's only natural that people would presuppose that Disarm The Descent would turn out to be an Alive Or Just Breathing 2 or something in the vein of Jesse and Adam's recent side-project, Times Of Grace.  Pleasantly enough, however, the album doesn't dominantly sound like one or the other.  Rather, it takes the strengths of both and combines them into what results in a very enjoyable listening experience.  Disarm the Descent is ultimately the culmination of mixing the aggressive heaviness of Alive Or Just Breathing, present in tracks like "The Hell In Me" and "All That We Have," and the melodic nature of Times Of Grace, present in tracks like "A Tribute To The Fallen" and "Always." The riffs are catchy, the breakdowns are tastefully done, the delivery of the clean vocals is impressive, and the beats have got some groove.  What more could you want from Killswitch Engage at this point in their career?

What really makes this album a worthwhile listen, though, is that it comes across an honest effort from the band.  Their self-titled album from 2009, and even 2006's As Daylight Dies to some extent, lacked staying power and didn't offer an album experience that was very memorable.  Sure, they had their singles and radio hits that weren't too offensive, but the overall album experience is where albums like Alive Or Just Breathing and The End Of Heartache thrived.  Disarm The Descent makes an admirable effort in returning to this balance of accessibility and overall heaviness.

Alas, there are negatives to be had here.  Depending on your opinion of Killswitch Engage, Disarm The Descent is not likely to sway you away from that opinion.  If you hate or are indifferent to them, you'll more than likely pay no mind to this album...it certainly isn't groundbreaking by any means.  While this album does offer something unique to the Killswitch Engage discography, it doesn't necessarily offer anything to the metal community that hasn't been heard.  The song structures become rather predictable and rarely vary.

That being said, however, Disarm The Descent is an album that Killswitch Engage needed to release.  It doesn't offer anything that could be considered groundbreaking, but it is certainly worth your time if you're in the mood for a fun and easy listen.  If Alive Or Just Breathing was one of those albums that acted to you as a gateway to heavier music, hearing Jesse within a Killswitch context again should help you to develop a pretty good soft-spot for this one.