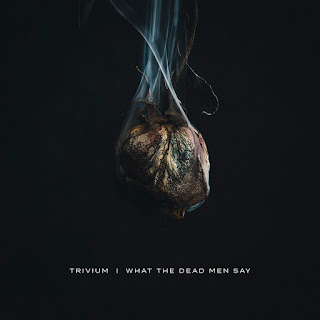 Starting off with tremolo guitar picking, the title track transitions into a bouncy guitar riff that carries an undeniable sense of groove. Combined with one of the more memorable choruses on the album (I've found myself whistling it a couple times a day since I've heard it), the album is opened up with a palpable energy. "Catastrophist" follows up with more rich vocal melodies but stands out moreso from Alex Bent's drumming proficiency along with a surprising guitar section that sounds like it came from Dream Theater's playbook. The all-around heaviest experience that What the Dead Men Say has to offer comes "Amonst the Shadows and the Stones". With forceful screams, rolling drum rhythms, and gnarly guitar riffs, each facet of the band works in unison to create a track that's more than worthy of taking a spot on your workout playlist, very much akin to "Beyond Oblivion" from the previous album. "Sickness Unto You" and "Bending the Arc to Fear" are in the same league of heaviness, boasting breakdowns that would make Unearth blush but also featuring plenty of interesting guitar scales to bring a satisfying amount of nuance. The mostly vocally adventurous parts of the album are most prominent on tracks like "Bleed Into Me" and "The Defiant". Matt Heafy's vocals fluctuate to ingrain the melody of each chorus in your head but harmonized guitar riffs are utilized effectively to make things not sound so cookie-cutter. "Scattering the Ashes" and album closer "The Ones We Leave Behind" completely flip things where even the vocals take the backseat to the central guitar riffs.

Whether you are more partial to the band's melodicism or its heaviness, What the Dead Men Say delivers on both ends of the spectrum in ways that feel more organic than it did in past releases. A lot of what makes the flow of this album feel so natural is how healthy doses of the band's influences are proudly brought to the forefront. Whether it's the blast-beat drumming of death metal, the tremolo guitar picking of black metal, the harmonized guitar riffs of thrash and classic metal, or the breakdowns of hardcore, every element comes together into one cohesive sound that is definitively Trivium. In the end, being able to evolve your sound over many years while remaining true to your core is what every band would kill for. What the Dead Men Say does just that for Trivium.