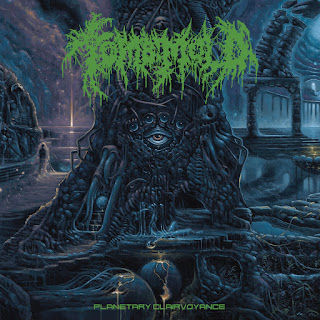 The year was 2017 and a bunch of unassuming Canadians were about to release their first full length LP. Little did the extreme metal underground know that they were inviting in an infestation like nothing they had seen before. The aforementioned release, Primordial Maliginity garnered some press and was the start of something special. 2018 had the band change labels to the insanely powerful 20 Buck Spin and released an album that really changed how people thought of Tomb Mold in general, Manor of Infinite Forms. It was my very own #2 album of the year in 2018 with its cavernous crawls and addictive riffs and seeing 2 great shows performed by the band; one with Of Feather & Bone at Montclair, NJ's Meatlocker and one on a bill with Daeva and Horrendous at Brooklyn's Saint Vitus. Each and every time I saw the band they were in good spirits and especially complementary of NJ's premiere filthy basement venue. So when 2019 was told to be bringing more vile fruits of their labor, I was intrigued, happy and also worried that such a quick turn around could send the band careening into a ditch on the side of the road like Memoriam. Planetary Clairvoyance is the name of the game for album # 3, let's see how it compares.

Tomb Mold has gotten attention for sounding like they play in a deep dark cavern and that is no different on Planetary Clairvoyance. Their muddied guitars coupled with their unrelenting guttural vocals help the listener make no mistake when trying to figure out what sub-genre of music they are listening to; this is death metal. Our favorite men from the north have added a bit of technical flair to their attack as well, plodding riffs might be their meat and potatoes but tracks like "Beg For Life" and "Infinite Resurrection" vary this up with some space age chord progressions. Vocalist/Drummer Max Klebanoff provides as much power behind the battery as he does on the mic and being able to do both is a rare feat; one that he excels at and takes to maybe the greatest heights in the genre since Autopsy's Chris Reifert.

Founding guitarist Derrick Vella is the man responsible for a considerable amount of the riffs the band employs, of particular note in the past was "Abysswalker" which is demonic ear candy. This time around he balances that out with tracks like "Cerulean Salvation" which appears simple on the surface but each repeated listen pulls back the curtain just that much more. The drum, guitar interplay adds additional fun to the chaos and showcases the foursome's ability to craft songs much like their progenitors. Songs like this remind me that Tomb Mold sound like Canada's long lost response to Bolt Thrower; that is not a comparison I would throw around lightly.

With an uptick in flash and flourish, Tomb Mold are maybe able to pull in fans they might have missed with Manor of Infinite Forms, but this is not a divisive album at all, fans of old will be familiar with this particular mold. In this recent death metal explosion I cannot think of a greater first three album run since Horrendous did it earlier this decade and over a larger expanse of time. Tomb Mold are here to stay, if that wasn't obvious in 2018 maybe you can put that in your collective 2019 pipes and smoke it. These are the current and undisputed kings of the genre bar none, Planetary Clairvoyance is a must listen.