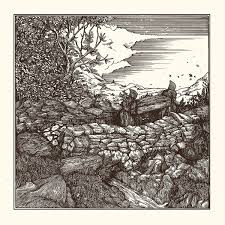 The "post-" genre seems to have taken on a life of it's own in the past few years.  When I began listening to metal intently over a decade ago, it felt like "post-metal" was reserved for living legends Neurosis and ISIS (RIP), and then "post-hardcore" was bandied about for bands like Thrice and Thursday.  Now? It seems like everything new is getting "post-"ed.  It feels like a catch-all of sorts, as though when a band has a sound that doesn't fit neatly into a predefined genre, it becomes "post-whatever genre."  I bring this up because in listening to and reviewing Mire, the debut full-length by the UK's Conjurer, I am incredibly tempted to label the band post-something, and I feel that doing so would take away from the magnificence of this album.

Ok, so while "magnificence" is a valid adjective for Mire, but I'll be honest: it's going to take you a minute to get there.  "Choke" is a solid opener, easing the listener into the album with a thunderous, pondering riff, before hardcore vocals enter.  Guitarists Dan Nightengale and Brady Deeprose share vocal duties, and their double guitars and roared vocals early in "Choke" bring to mind a slower, less frantic Converge.  While obviously such a comparison is a tremendous reflection on the talent on display, it isn't until the back end of "Choke" that bleeds into "Hollow," with it's rumbling low end and lurching guitar melody that Conjurer really seems to be standing on their own legs.  "Hollow" introduces some exceptional melodies to the band's sound, and then "Thankless" ups that ante spectacularly with it's middle passage and clean vocals.  I don't know which vocalist provides them, but the impassioned howls in "Thankless" are my favorite vocal moment of the album.

While the first three tracks offer peeks into what the band is capable of, "Retch" is really where Conjurer puts it all together and Mire really starts to shine.  Drummer Jan Krause pounds the track into existence, and then proceeds to absolutely lay waste to everything in his path.  "Retch" manages to be an explosion of lightning-fast rage and energy, a sludgy, mountainous crawl, and then an avalanche of sound, all in three minutes.  "Mire" opens with a contemplative riff before exploding into the most interesting, frantic segment on the album.  It was on my first listen of "Mire" that I really heard and realized the depth and layering on display in Mire, which made subsequent listens more rewarding.  While Conjurer are undoubtedly talented musicians, the mix and production of Mire are similarly deserving of accolades.

"Of Flesh Weaker Than Ash" is the album's best track, and one of the early contenders for a top song of the year.  Simmering with emotion, it takes its time building atmosphere, continually zigging in anticipation of a zag and vice versa, before "Hadal" closes the album in spectacular fashion, boiling over with slow, powerful rage.

All in all, what starts out as a decent if not groundbreaking effort eventually morphs into something special over the back half.  Conjurer's Mire is an album that manages to mean everything to nothing in terms of the "post-" labels.  Hardcore, metal, atmospheric metal, and, yes fiiiiiiiine ISIS-esque post-metal are in play on Mire, to an overall solid result.  Yes, "Choke," "Hollow," and "Thankless" tread over familiar territory offering glimpses of excellence, but the last four tracks on Mire elevate the album to something more, especially the title track and "Of Flesh Weaker than Ash."  While  the "loud/quiet/loud" dichotomy isn't anything new, Conjurer is clearly adept at wielding the style.  Mire is one of the first best albums of 2018, and Conjurer is absolutely a band worthy of the hype they've been acquiring.  Check it out ASAP.

Conjurer's Mire is out now via Holy Roar Records

Posted by Brutalitopia at 8:58 AM