All Pigs Must Die - Hostage Animal 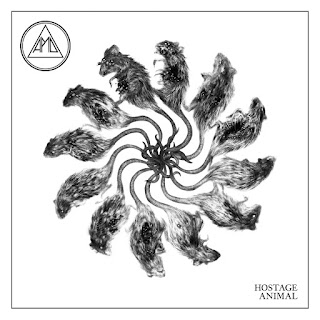 Every music fan I know has a musical sweet spot, the middle of a venn diagram wherein resides the music they absolutely fucking love.  They may "listen to everything (except country!)," but it's that intersection that represents their absolute favorite musical sensibilities, regardless of genre.  For me, that melting pot looks something like a stew of slow- to mid-tempo, atmospheric, ten-plus minute songs with progressive shifts, strong melodies, a bit of groove, and harmonizing vocals.  I love bands and songs that stray from those tendencies, but when an album lands right in that sweet spot... that's the fuckin' jam.  There's a comfort there, a knowledge that you as a listener have heard enough to know what you like.  I bring this musical g-spot up because to me, the only thing better than finding something new that fits into an established idea of "favorite" music is finding something new that doesn't check any of your Favorites boxes, but still gets your head banging, your pulse racing, and your motor running.  From the title of this post, I'm obviously talking about Hostage Animal, the third full-length from All Pigs Must Die.

I'd heard the name APMD before; I knew they were a "supergroup," and was vaguely aware that they are a "fusion of crust punk, hard core, and metal."  I knew the drummer was Ben Koller of Converge, but had to read the press release accompanying the promo to learn the other members are vocalist Kevin Baker (The Hope Conspiracy), guitarists Adam Wentworth (Bloodhorse) and Brian Izzi (Trap Them), and bassist Matt Woods (also Bloodhorse).  Crust punk and hardcore are decidedly not in my typical wheelhouse, but it was a somewhat chilly October morning, and I needed some motivation to hit the gym before work, so I figured I'd give Hostage Animal a shot.

"Hostage Animal" opens up the proceedings with a pulverizing combination of pounding drums and a driving riff, an aural shot of epinephrine directly into your heart like that that scene in Pulp Fiction.  It's a song with a sense of primal fury, and the dizzy guitar solo two thirds of the way through is less of a respite from the aggression than it is a signal of the descent into madness Hostage Animal is undertaking.  Of all the things I've never liked about a lot of hardcore I've listened to is that I can't differentiate what all the different instruments are doing, and it starts to sound jumbled; whether that's intentional or I just have shit ears remains undetermined.  APMD solves this issue by letting each instrument shine through the mix at various times for various reasons.  Woods' runaway train bass line at the end of "A Caustic Vision," the machine gun bursts from Wentworth and Izzi's guitars to open "Meditation of Violence" (which is easily my favorite sub-1:00 song ever), Koller's cymbals throughout the entirety of the album, and the way Baker slows his vocal cadence to enunciate certain words and phrases; all of these parts showcase the members of the band, giving listeners something to grasp on to and follow throughout the whirling dervish of Hostage Animal.

That isn't to say those are the only standout moments on the album, or that Hostage Animal is a one note album; neither of those are close to true.  "Slave Morality" may as well be a funeral doom dirge compared to the other tracks it sits next to, but its relatively sluggish pace is less of a rest and more of a switch from a suffocating frenzy to a smothering groove.  Follow up song "End Without End" is essentially a six-minute panic attack, uncomfortable and dissonant and completely fucking awesome; three and half minutes in, the track completely (I mean completely) changes things up, to absolutely stunning effect.  The two "parts" of "End Without End" feel like they could be two different songs - hell, they could be two different bands - but they clearly belong together as one complete piece.  "Blood Wet Teeth" completes my three-song run of Hostage Animal favorites, and it's a massive buzzsaw of a track.

I think it's good to have a general idea of what you really like in music; there's so much out there that having an established starting point that you stick to when going to the record store (or Bandcamp) can be invaluable in saving money while still discovering new bands.  That said, it's also great to completely knock the status quo on its ass from time to time, to give your typical listening habits the ol' left hook-right jab and leave them reeling from the inclusion of something new.  Hostage Animal is that beatdown for me this year.  Its raw, unflinching emotional power is a kick to the teeth, and even the slower parts are absolutely crackling with a ferocious energy, ready to explode into a kinetic storm.  It's a thirty-five minute shot of concentrated adrenaline that could probably power the nation's power grid if we hooked it up.  I encourage you to check it out.  More importantly, I encourage you to find any album that appears to be outside your comfort zone, and give it a shot.  Maybe you're out $10 and an hour of time, but maybe that musical sweet spot expands just a little more.