Memoriam - For The Fallen 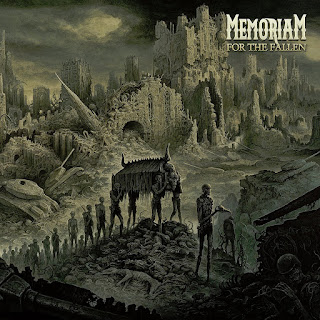 Few bands have the clout in the death metal community that Bolt Thrower did; their name was synonymous with crushing riffs and war themed death metal. But when the band decided to call it quits after the death of drummer Martin "Kiddie" Kearns, many a tear was shed on the battlefield. Enter Memoriam and their debut For The Fallen, the first new material of a Bolt Thrower collective since 2005's Those Once Loyal. Will For The Fallen be the great tribute to a friend with a classic sound?


The answer to that question is a resounding yes. Karl Willetts sounds excellent as the front man, much as he always has. This is a very mature death metal album that could only have been written by scene veterans also inclusive of Andy Whale (from Bolt Thrower's earlier days) and Frank Healy (ex-Benediction). Ominous tones start the album off to a slow crawl on the self-titled track; then enter 'War Rages On'. The furious riffs on here are immediate classics, the back and forth between that and Willetts' veritable tank of a voice push back barricades and takes no prisoners. Drummer Andy Whale is also shot out of a cannon, his blast beats are absolutely enormous and mount their own offensive. Scott Fairfax, a relatively new addition to the mix of these seasoned veterans delivers on his own front; you would swear he had 5 albums under his belt, but instead earned his chops playing live sets for Benediction among other things.

'Reduced To Zero' has the band give the listener a reprieve with a noticeable down tick in speed, which is made up for with an atmosphere, of a post battle campaign full of death and pain; a place that once had something to offer, literally has nothing left. The speed ramps up on 'Corrupted System'; it's a song that really hits on the hardcore punk that influenced the original wave of UK death metal and also the slow crushing riffs that were made famous by Bolt Thrower. 'Flatline' pummels foes with various types of riffs interspersed within the song and ending with the end of a soldier's life.

'Resistance' contains a driving riff you usually don't find on the b-side of many death metal albums, and it doesn't have to be a full force speed metal riffs either, but the mid-tempo slog more than suffices until the guitar solos kick in. Fairfax on the surface level might not get much attention considering the other parts of the band but his presence is more than felt as the parts make a whole.

It has been said to myself that only Memoriam could have written this album and that is a fair point, 'Last Words' is a fitting closer to this deep album, an ode to the past with an eye on the future. Only a band with this much experience collectively could have put For The Fallen together and as a metal community we can only be thankful for it and look forward to the next strategic maneuver as this metal militia shows no signs of stopping.