The Granulating Durftanic Mills: Random Musings on Carcass, After Shows, and Chicago Metal Festivals I Did Not Attend 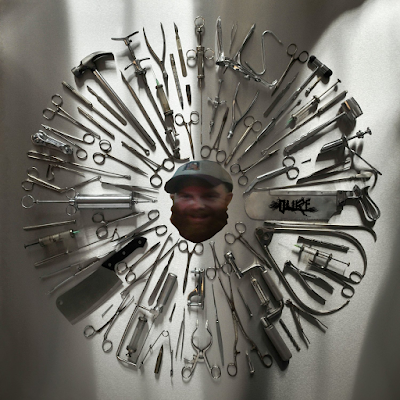 On any given day, I have a lot of thoughts, most of which are incoherent nonsense like "Who picks up more chicks/dudes: killer whale trainers or helicopter pilots?" (orca trainers, hands down).  Occasionally these thoughts slip into coherent nonsense, which is an interesting and scary change of pace; interesting because it's nice to think about things, and scary because I have this blog with which to share my musings with the world, where they will remain online forever and undoubtedly become the basis of future societies.  On with the thoughts!

I saw Carcass and Deafheaven this past weekend at their official Chicago Open Air After Show, and it was pretty great.  The show was at the Metro, an iconic Chicago venue that I don't get to nearly as often as I'd like (because a lot of metal shows are elsewhere, but still).  My buddy Nick and I got there just in time for Deafheaven to start, and the first thing I noticed was the place was surprisingly not packed, which surprised me quite a bit.  I hadn't seen Deafheaven live since immediately after the release of Sunbather, so I was pretty excited to hear stuff from New Bermuda live.  They didn't disappoint, playing "Brought to the Water," "Luna," and "Baby Blue" from their newest album, before closing with Sunbather's opening track "Dreamhouse"; as good as the tunes are on the record, Deafheaven truly is a live band, and their performance was incredible.  "Baby Blue" especially benefitted from the live treatment, as its 80s downbeat pop sound (a phrase I just made up, I think) really shone through onstage.  It was a ridiculously tight set, and a nice reminder that Deafheaven is the rare band that lives up to all the hype, haters and troo kvlters be damned.

As great as Deafheaven was, Carcass was somehow better.  I jumped on the Carcass bandwagon late (like really late; like Surgical Steel late), but it's always exciting to see a legacy band, especially when their comeback album is in the discussion for best metal album of the past five years.  They didn't disappoint, walking out to Surgical Steel opener "1985" and then running the gamut of their career throughout their set.  Like Deafheaven, Carcass' set was technically exquisite, all instruments played with a surgeon's precision; unlike Deafheaven, the members of Carcass let it show that they were having a great time.  Jeff Walker was actively smiling while joking with the crowd, and in conjunction with their high-energy, balls to the wall set, it made for a hell of a time.  Plus they played "The Granulating Dark Satanic Mills," my favorite Surgical Steel track, so that was neat too!

I mentioned earlier that the Carcass/Deafheaven show was an official Chicago Open Air After Show, which is just as true now as it was two paragraphs ago.  I had sort of forgot about that, having not gone to Chicago Open Air, until after the second song of Deafheaven's set, some jagaloon right in front of the stage through his hands in the air and said "Same set?  Same set huh?  Gonna be the same set?"  Concert-goer douchebaggery aside (seriously, it was old ten years ago when at my first Thrice show some dickhead kept yelling "Deadbolt!" and it's old now.  Knock it the fuck off), this jamoke got me thinking.  If a band plays an after show, what is the etiquette on the setlist?  On one hand, there's a good chance people who just saw you play earlier in the day will also be seeing you play later in the evening, so it does them a disservice to pay twice for the same show.  On the other hand, there will also be people there who did not see you play earlier in the day, and maybe you love your set list and want to let those people hear it.  I thought about this for entirely too long before realizing it's the same as when a band or artist plays two or more nights in a city: I'm fine with 75% of the set list being the same, and then the band changing it up a bit to differentiate between shows for the other 25%.  That's the ideal.  Of course, completely different set lists are neat, and honestly, if a band plays the same set twice in a day, if you paid the extra to see them a second time, you probably like them enough that you'll be ok seeing those songs again in a more intimate setting.  This is just an incredibly long-winded way of saying I support bands doing whatever they want in this scenario (although if I'm being completely honest, I definitely thought a Deafheaven after show was my best possible chance to see "Language Games" in person because I assumed they'd switch it up a bit.  Someday...).

Another thing I mentioned earlier (indirectly) was that Chicago Open Air Festival was this weekend.  Similarly, Metal Threat Fest was also this weekend.  If you are a close reader of blog titles, you have already surmised that I did not go to either of them, and if you are a close reader of paragraphs, you have already surmised that despite my lack of attendance, I have thoughts on them anyway.  Chicago Open Air took place at Toyota Park and was headlined by Rammstein, Disturbed, Korn, and Slipknot; also (further down) on the bill were Meshuggah, Gojira, Deafheaven, and Carcass.  It was an interesting lineup, and to be perfectly frank, one that did not inspire a desire to purchase a ticket.  Sure, high school Durf probably would have enjoyed seeing what Breaking Benjamin looks and sounds like, and to be completely honest, it was a lineup that was guaranteed to bring in a lot of people.  But at the end of the day, it came across like a three day Ozzfest, punctuated by headliners you hear on the radio and a handful of metal bands, all relegated to the second stage.  On the plus side, this was the festival's first year, and if they use the momentum generated by this year to go bigger and bring in more underground metal next year, then I promise to take it all back and buy a ticket next year.  Especially if I can channel my inner angsty teen for these guys:


Metal Threat Fest was much more an undergound metal affair, held at the wickedly awesome Reggie's Rock Club over three days and featuring bands like Razor, Exciter, Absu, The Ruins of Beverast, Inquisition, and that Australian band that won't stop saying stupid things right now.  Had I gone to either fest, MTF would have been it.  I honestly don't remember why I didn't get tickets, but this certainly seems like something to keep an eye on next year.  Speaking of, I literally JUST read that MDF is switching to two venues only for next year, and I can't decide if that sounds amazing or iffy, although if anyone could pull that off, it's MDF.

That's all I've got for now, so here's the new Red Fang track to see you out of my head and back in to yours.  It's from their new album Old Ghosts that's out later this year, and it sounds like a Red Fang track, which is to say, awesome.  Be good to each other.