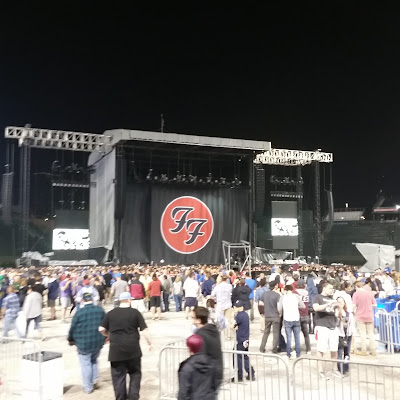 There's something about growing up with a popular band, hearing their singles on the radio, watching as their lead singer becomes a ubiquitous media presence, that sort of makes you take them for granted.  You begin to lose sight of everything you love about them, and start focusing on the things you don't.  They change, or try something new, and resentment grows.  It happens in every relationship.  I've been a Foo Fighters fan for going on fifteen years, and I'll admit to having those feelings.  "Is this really one of my favorite bands?" "Are they even trying anymore?"  "Why does Dave Grohl always talk about his love for metal despite only making ONE fucking Probot album?!?"  It just seems it's a part of human nature to focus on the negative parts of things you hold so dear.  Fortunately, sometimes there are moments that grab hold of you by the ears, pull you in close, and scream in your face "YOU'RE A FUCKING MORON; YOU KNOW YOU LOVE THIS SHIT AND THIS IS WHY!!!!"  Grohl and his fellow fighters of foo's concert at historic Wrigley Field two Saturdays ago was just such a moment.


Paragraph of context: I've seen the Foo Fighters once before, back in 2008 when they were touring behind their decent Echoes, Silence, Patience, and Grace album.  It was a hell of a show; two-thirds electric and one-third acoustic, drawing on their then decade plus of hits.  Since then, they've released two more albums, 2011's Wasting Light, which is my favorite album they've ever put out, and this year's Sonic Highways, which is a fairly underwhelming album made much better by watching the accompanying HBO documentary series chronicling its writing and recording.  Despite living in Chicago, I missed the band's headlining slot at Lollapalooza a few years back, and then their gig at the itty bitty Cubby Bear (across the street from Wrigley) last year sold out in under a minute, and then even THIS show sold out, so as of three weeks ago, I was facing the not terrible prospect of pulling up a seat at a bar patio in Wrigleyville and simply listening to the band.  Thankfully, Dio smiled upon me, and I was able to snag a pair of tickets for the Durfette and I to see the show from inside the friendly confines when a few hundred were released.  Quick side note: This was the Durfette and I's first show since we made honest homo sapiens out of each other, as well as our first show since Steven Wilson blew us away in June.  So even though I got the tickets, and we were excited, it felt like it was going to take a Herculean effort by the band to justify the relatively steep cost of admission.

It was a rainy day in Chicago the day of the show, so i'll admit to bailing on the openers to drink some beers and play some games (look up Fibbage if you don't know what it is, because it's great) at a friend's place before the show, missing the openers in the process.  The Durfette and I arrived right as Cheap Trick was finishing up "Surrender," grabbed a hot dog, and made our way to our rain-soaked seats.  We watched the field in front of us fill up, and I semi-awkwardly and unsuccessfully tried get the attention of a fellow wearing a "High on Pryor" t-shirt to tell him it was awesome.  As it inched closer to the Foos' starting time, I looked around and noticed just how packed Wrigley was.  I've gone to my fair share of Cubs games, and I've never seen the place so alive, so charged for what was about to happen.  Probably because there's a century of disappointment in the place, but who knows. 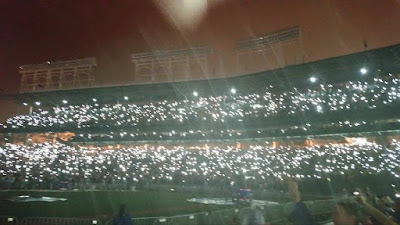 When a band opens with their biggest and arguably best song, you know you're in for a treat.  Such was the case on this night; right out of the gate came the unmistakeable intro to "Everlong," which has long been the Foo Fighters' closing song for concerts.  Opening with it got the crowd going immediately, and following it up with "Monkey Wrench" and "Learn to Fly," complete with a detailed crowd address by Dave Grohl during the former, only kept the intensity going.  Oh, and speaking of Dave Grohl: dude broke his leg June 12.  Which means it's still broken.  So he's doing this tour from a "throne" he designed while high on morphine.  Even sitting down for the whole set, the guy has more energy, charisma, and stamina than any frontman not surnamed Puciato.  If you don't like Dave Grohl, I don't know what's wrong with you, but you're entitled to your opinion; if you don't respect him for the lengths he goes to to put on a show, then I'll fucking fight you right now, because you're the worst.

Following the three openers was "Something From Nothing," the Chicago-based track from Sonic Highways, for which Cheap Trick guitarist Rick Nielsen came out to lend a hand.  Also on hand was the rain, which has stayed mostly away until now.  After "The Pretender" (really the only great track from Echoes...), the band went into a slowed down rendition of "Big Me," featuring Dave talking about his love for the city of Chicago, his history with family and music here, and a dedication to the tour's lighting designer that culminated with every light in the stadium being turned off and the audience turning on their cell phones.  Normally, I hate the cell phone as lighter thing, but good goddamn if this image didn't give me chills.  Also: during the song, the rain stopped, and didn't return for the rest of the show. 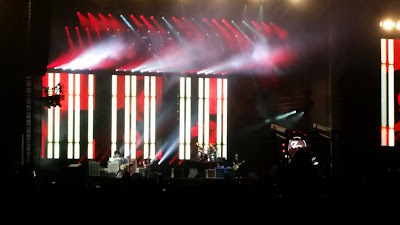 After a few more songs, Grohl introduced the other members of the band as they played a great mix of covers; "We know the first minute and a half of every Van Halen song; that shit's hard!" Grohl exclaimed as guitarist Chris Shiflett launched into "Eruption;" other guitarist Pat Smear orchestrated a cover of "Roundabout" by YES, and drummer Taylor Hawkins delivered a stellar cover of Alice Cooper's "School's Out."  Whole band introductions are seldom utilized, and even though this part of the concert was easily the slowest, the fact that Grohl took the time to recognize his supporting cast and let them each have their moment was pretty incredible.

The back half of the concert was a mix of phenomenal and personal, as the band began with fan favorites/classics "All My Life" and "My Hero" before  taking time to have the crowd sing Grohl's cousin and mother "Happy Birthday."  Seeing the joy on Dave Grohl's face as he brought out two important women in his life was nearly overwhelming; "This lady is the real reason we're all here tonight!" he toasted his mother.  "She's the coolest mom ever.  She was a public school teacher for 35 years, and then she retired.  I told her 'Fuck the cruise ship; come on tour with the Foo Fighters!' and she did, and one day I found her drinking with Green Day.  That really happened!"  Grohl's excitement at involving his mother and cousin in the show was palpable, and it carried through the next run of songs, beginning with the underrated One by One's "Times Like These," and a trio of Wasting Light tracks ("These Days," "White Limo," and "Arlandria") interrupted by an inspired cover of the Rolling Stones' "I Miss You."

With "Everlong" out of the picture, the concert concluded in the best possible way; Grohl dedicated a song to "all the old time Foo Fighters fans" and brought the house down with a pulverizing "Breakout," before surprising everyone in attendance by playing "This is a Call."  Which would have bee the highlight of the evening, and would have left me perfectly satisfied, until Grohl teared up while addressing the crowd afterword.  "I'm such a pussy" he said... before destroying everything with the most intense, amazing version of "Best of You" I've ever heard.  The Foo Fighters have never been an encore band, and so every bit of energy they had left, they left on "Best of You;" as Dave Grohl used crutches to get into the runway after the song finished, you could see the exhaustion on his face, and as his bandmates joined him, you could see they had given their all as well.

It can be a challenging thing to grow up with a band.  But maybe the most challenging thing can be admitting that even as your tastes and that band change, even as you discover new music and the band goes in different directions, a band that you let slip below the surface and into relative obscurity can still be your favorite band.  And that's what the Foo Fighters are: my favorite band.  Talking to the Durfette after the show, she remarked that she's never seen me so happy as when I was shouting along to every song, overjoyed that I was getting to see this band in this place.  I've never shouted myself horse to Opeth, or Agalloch, or Mastodon; shit, if I'm being honest, I've never cried during any of those bands, and I teared up at least four times during this show.  Honestly this show, and this band, was the loudest and most "into it" I've ever been.  But that's what you do for your favorite band, even if you don't realize until midway through that that's what you're seeing.  Dave Grohl and the Foo Fighters are my favorite band, and even though there have been times where I've doubted what they're doing, or why they're doing things, after over ten years, their status ain't likely to change.  All I can do is hope it's not another seven years before I see them live again.