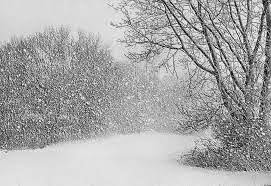 First off, an apology; I originally meant for this series to be a daily occurrence, Monday through Thursday this week.  Unfortunately, starting a new job and preparing to move at the end of the week forced a bit of a delay.  I have no idea how long it will take me to finish this series, but I promise that as soon as I finish each post, it will be up.

When I started this four-parter Monday, I talked about how seasons bring about different feelings and thoughts, and how the right music can hit that perfect sweet spot for the weather (that's actually the point of the entire series in a nutshell).  I started with Autumn, and it only makes sense to go in order, so this post will focus on the perfect music for Winter.  Bundle up and read on after the jump.

My second winter in Chicago was the first time I fully realized that the elements can kill you.  Sure, I'd heard of people freezing to death in the mountains or dying of dehydration in the desert, but it wasn't until that winter that I really understood that you don't have to wander to a distant corner of the globe to truly feel Mother Nature's homicidal wrath.  The entire month of February, the wind chill scarcely made it above 0.  It was frigidly cold, and the wind howled constantly, seeking out whatever tiny sliver of opening through your thirty layers of clothing it could, and then exploiting that opening, chilling you to the bone.  I had been cold before, and I've been cold since,  but I have never in my life been THAT cold.  Winter more than any other month is about fighting, standing up to the elements and refusing to yield, looking the Windigo right in the face and saying "N-n-n-not today, m-m-m-motherf-f-f-fucker."  To that end, you need two genres for winter, one for your resolve, as well as one to pay tribute to the beast you're bravely battling: death metal and black metal.  The latter of these probably isn't too much of a surprise,  but the key to each is staying away from unruly sub-genres.  Progressive or melodic death metal can soothe you into a sleep from which the Frost God will take you, and ambient black metal doesn't properly convey the fury of Winter.

I can't think of any better way to pay homage to the Snow Lords than with Darkthrone's A Blaze in the Northern Sky.  It doesn't get any more black metal than Fenriz' blackened howls roaring through blistering drums and distorted, shredding riffs.  I'm of the personal opinion that black metal has improved since it has embraced higher production standards, but A Blaze in the Northern Sky is pure lo-fi perfection, as well as one of the best tributes you can offer to the merciless Winter.  "Where Cold Winds Blow" is an obvious choice here.

Now that you've offered your audio sacrifice to the Polar Vortex, it's time to warm your soul and fight the increasing numbness in your extremities, to give yourself the needed resolve to walk to the store two blocks away because you're out of eggs and coffee, and you'll be damned if the frigid temperatures will keep you from breakfast!  And when you have a perilous journey through ice and wind ahead of you, you know there's only one way to turn:

That's right, you puny, heat-turned-up-to-80 mortal, VIKINGS.  The original conquerers of the North fear nothing, including sub-zero temperatures.  Amon Amarth don't get enough credit in the death metal community, as they are ofter cast aside as "Viking metal" (not a thing) due to their subject matter, instead of honored as the dm legends they truly are.  Listen to this song and tell me that it's too cold outside; that's right, you can't.  You're either shamed in to going because you know you'll never be as strong as a Viking, or you're so amped that you've already run out the door without remembering to get dressed.  That's ok; there's no shame in nudity, and your adrenaline will keep you warm until you get home.

Ok, now that we've both honored and defied the Deity of December, let's go back a bit.  While the throes of Winter can be agonizing and deadly, there does exist a time and place in late Autumn when Winter makes its first appearance.  The day itself seems like a late fall day, but it's a bit colder and the clouds are a more ominous, darker shade of grey.  At some point on this day, the first snow of Winter will fall.  It may be flurries, or there may be a few inches of the stuff.  Either way, there's no way to deny that there's something almost spiritual about the first snowfall of the late year.  There is but one musical solution for this day; my personal tradition holds that I spin this record with three fingers of good, smoky whiskey, while watching the snow.  The record is The Mantle, by Agalloch, a band that needs no introduction 'round these parts.

While you can never go wrong with Agalloch (ever), there's simply no topping the wonder that is The Mantle as the soundtrack to winter's first snow.  The entire album feels like the first snow: cold but not frigid, wondrous and alive while knowing that death is never far away.  Listening to The Mantle while walking home from class years ago was my first experience with the music I was listening to matching the weather I was surrounded by so perfectly; I hope it's similarly enjoyable and enchanting for you.

What are your favorite songs, bands, or genres to listen to in the dead of winter?  Let us know in the comments!