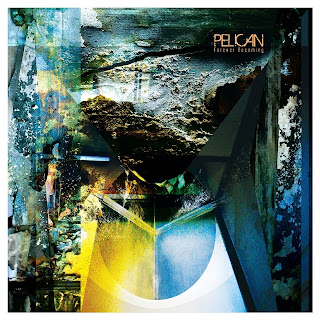 It’s been four years since Pelican’s most recent full-length, 2009’s What We All Come to Need, and the band has made some changes since then. The most obvious change is new guitarist Dallas Thomas, who joined the band last year after founding guitarist Laurent Shroeder-Lebec stepped down. The more nuanced change occurred in the band’s music; 2012’s Attaraxia/Taraxis EP had a much more rock-oriented feel than the doomy atmospherics and crushing riffs of previous efforts by the band. With the emergence of other instrumental bands such as Animals as Leaders, Scale the Summit, and Russian Circles in recent years, many feared Pelican was in danger of becoming an also-ran instead of a leader in the music community.


It turns out that fear, and lack of faith, was sorely misplaced. Forever Becoming, the band’s newest studio album that comes out October 15th on Southern Lord, has everything that’s made Pelican great through the entirety of their discography. It’s a staggering beast of an album that calls to mind the crushing riffs, ambiance, and underlying melodies that have long been a Pelican staple. More than any prior album, however, is the feel of intensity on Forever Becoming. Pelican’s live shows are a sight to behold, four men leaving everything on the stage, a swirling mass of riffs, feedback, sweat, and raw, unadulterated energy. While the band’s previous albums have translated well to the live setting, Forever Becoming feels like the first album the band has written with live shows in mind. The energy on the album is furious and unrelenting, with the even the quieter moments teeming with potential energy simmering and threatening to boil over into a kinetic frenzy at a moment’s notice.

And throughout, as in all Pelican albums, each band member shines through. Listening to Pelican truly feels like an exercise in hearing a band with no egos, no desire to hog the spotlight, just a deep need to make the best music they can; in that unselfishness, all four band members’ talents explode into something great. Trevor de Brauw and Dallas Thomas’ guitars alternate between concrete-heavy riffs and beautiful melodies. Larry Herwig’s drumming remains a standard in non-flashy perfection, and “Vestiges” opens with one of Bryan Herwig’s best bass rolls to date.

Forever Becoming is a terrific album, one of the year’s best. More importantly, it is an album with a perfect title, showcasing where Pelican’s sound has been, is, and could be going forward. It’s an album that simultaneously makes you want to bang your head and think about your life, a seamless mix of aggression and introspection not easily – or often – found in music of any genre. Ten-plus years strong, Pelican has weathered the storms and come out ahead as one of the most important bands in music, a position they solidify with the astounding Forever Becoming. You’d have to be a fool to miss out.


Posted by Brutalitopia at 4:26 PM

Email ThisBlogThis!Share to TwitterShare to FacebookShare to Pinterest
Labels: Durf, Forever Becoming, pelican, Southern Lord, What We All Come To Need