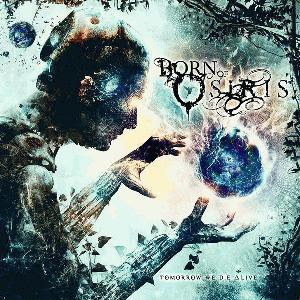 I’d be lying to you all if I said I wasn’t in the least bit interested to hear the new album from Chicago area natives Born Of Osiris. Coming off their last critically acclaimed full length album, 2011’s The Discovery, their brand new release, Tomorrow We Die Δlive, certainly had some expectations to live up to. Unfortunately, the loss of guitarist Jason Richardson proved to be much more detrimental than they’d like to admit. Through an obnoxious and tedious use of recycled breakdown-driven grooves and all-to-familiar soloing, Tomorrow We Die Δlive comes across as little more than a shell of what once made The Discovery so great. Ultimately, this release will expose your ears to a lackluster listening experience. In Δddition, they seem to have Δ big issue with a certΔin letter of the ΔlphΔbet, since they replΔce every single one in their trΔck titles with Δ triΔngle. See how Δnnoying that gets?

The biggest downfall of Tomorrow We Die Δlive is that it’s way too formulaic. The breakdowns, the progressions in the sweeping solos, they all just sound too much like the foundation that The Discovery was built on. Even worse is the fact that the part they forgot to mimic from The Discovery was the part where the songs were memorable. The whole mid-section of the album is an amalgamation of a ton of familiar grooves repeated to no end with only a handful of cool riff/keyboard sections. Perhaps the worst offender in terms of encapsulating all my disappointments with the album come to fruition in the track “Illusionist.” The track features a breakdown that rarely varies and mainly comprises the majority of the rhythm section for the whole song. On top of that is a keyboard line that gives off a quirky evil circus kind of vibe and soon a sweeping solo repeats the key patterns in a rather wanky fashion. My biggest problem with this track is that it sounds as if they came up with a sweep solo, threw a breakdown groove behind it and just called it a day from there. This is a prime example of how technicality alone does not automatically equate to a good song. It all has to fit together, as opposed to hoping random ideas thrown together will just magically work. Unfortunately, this describes the feel of the album as a whole.

Tis not a completely bad forecast for the album, however. Albums tend to always have at least a few gems on them worth mentioning. There were a few songs in particular that I thought stood out from the rest of the pack. The first of these was also the first single to be released, “Machine”….. Sorry….”MΔchine”…*rolls eyes*. The main riff was engaging and the breakdowns, while slightly repetitive, paired well with the vocals to give the song a certain explosiveness. For the same reasons, the track “Divergency” was also another standout. Another track of note was “ImΔginΔry Condition” (I assure you I’m only replacing those stupid triangles at this point to keep my journalistic integrity intact). I liked this track in particular because it was the only instance in the album where a single riff was enough to carry the whole song; really, it’s just that cool.

Perhaps it was an impossible mountain for BOO to climb, but Tomorrow We Die Δlive falls short of living up to the expectations of being another Discovery. The clean production in combination with the almost mechanical soundscapes also negatively reinforce that most of this album consists of recycled ideas. Despite all of this, however, I would still say it’s worth at least a couple listens. You’ll surely come out of it with at least a song or two stuck in your head, but that’s unfortunately about all this album is good for. The album as a whole leaves much to be desired and ultimately is best described by chanting the acronym of the band. Perhaps the listening experience would be more enjoyable if you go into it not expecting much. It’s apparent BOO needed to buy a certain vowel to figure out the missing piece of their band’s success: JΔson RichΔrdson.

- Mick
Posted by Brutalitopia at 8:00 AM