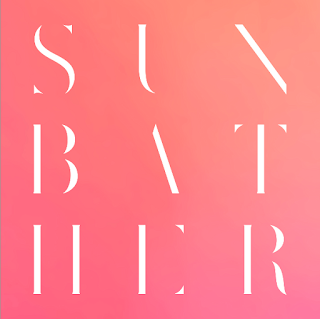 FOREWARNING: If you expect me to use the terms "hipster," and/or "elitist" and any possible combinations thereof in excess (or at all for that matter), you'll be sorely disappointed.  This is a review of the music, not my commentary on how they choose to dress or what particular community they're revered in.

It's apparent that San Fransisco black metal act Deafheaven doesn't know the meaning of the term "sophomore slump."  Sunbather, the follow up to their 2011 full-length debut, Roads To Judah, is not only an album that bests its predecessor but also enables Deafheaven to carve their own unique niche into the burgeoning atmospheric black metal scene.  From beginning to end, Sunbather is album that crafts an unbelievably enthralling experience.  Whether it be the traditional black metal guitar tones, the unrelenting blast beats, the clean shoegazey guitar passages, or the harrowing screams of George Clark, this album is one that is charming yet also haunting and empowering.  Take notice everyone.  This is "real deal" material.

While atmospheric/ambient black metal has been around for quite some time, Deafheaven succeeds with their second full-length album in defining a unique sound within the confines of that genre.  Even though they take advantage of many black metal tenets (blast beat drumming, tremolo guitar riffs, cold guitar tones, shrieking vocal screams) that are usually meant to drain the listener of any positive emotion, a counterbalance of melodic guitar riffs, acoustic guitars, underlying piano chords, and shoegazey dissonance are harnessed in such a manner that the end result is actually uplifting.  It's these emotional ups and downs that make Sunbather feel like an actual journey.

This journey begins with the track "Dream House" whose first half is almost purely black metal influenced and whose second half is primarily melody-driven which embodies this aforementioned counterbalance perfectly.  Even thinking about Clark screaming the line "I want to dream" at the end of that song gives me chills.  While all tracks are extremely impressive on this album, the next track that truly wowed me was "Vertigo," a near 15 minute track that is surely Deafheaven's most ambitious to date.  The track opens with a clean guitar riff that has an eerily foreboding vibe which eventually leads into a wall of distorted guitar chords and is soon after overlayed with.....wait for it........an actual guitar solo!  I can't say it was actually vertigo but my head was certainly spinning after hearing that unexpected treat.  Last, but certainly not least, is the album's closing track, "The Pecan Tree."  I can't remember the last time I've heard a closing track that was so effective and encapsulated an album so accurately.  Much like "Dream House," Sunbather's closing track starts off with a barrage of black metal rhythms only to transition it's last half into a build up of epic proportions, not to mention a melody of chords that will surely be stuck in your head for quite some time.

It's a rather arduous task to find any flaws with Sunbather.  Even splitting hairs is difficult.  I suppose having three interlude type tracks ("Irresistible," "Please Remember," "Windows") seems a bit like overkill.  However, even these tracks add that much more to the overall album experience with either their serene beauty or their creepy foreshadowing.  I always hesitate calling an album perfect, but in the case of Sunbather it's pretty damn close.

Sunbather is not only a HUGE step forward for Deafheaven, but also a defining album for them.  The maturation of their sound in the course of two years is quite astounding, to say the least.  Be it through the pummeling aggressiveness of black metal or the numbing tranquility of shoegaze, Sunbather delivers a emotionally varied ride that you surely won't soon forget.