Dream Theater Touring With Trivium?! Sign Me Up, Please. 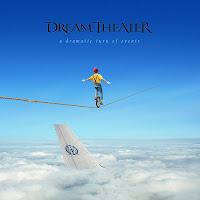 
Dream Theater has officially announced some initial dates of their fall tour in support of their upcoming September 13 release of A Dramatic Turn Of Events.  They're also bringing along this band named Trivium.  Who's ever heard of that band, right?

Here's some of the official statement from Roadrunner.

Dream Theater are also planning to embark on a massive world tour, where they will play selections from A Dramatic Turn of Events, as well as classic staples and fan favorites. Labelmates Trivium will appear on many dates, supporting their new album In Waves.

"We are all very pumped about the release of A Dramatic Turn of Events this September, as well as the world tour we'll embark upon in support of the album," said Petrucci. "Our first leg will bring us throughout North America where we'll showcase songs from the new album along with tons of fan favorites and a brand new tour production unlike any other that we've done before. We're equally excited to have our friends in Trivium join us. It's sure to be an incredible tour. We're looking forward to seeing all of our friends on the road this fall!"
Check out some of the initial tour dates after the break

The initial confirmed run of dates is below, with more to be announced imminently.

Email ThisBlogThis!Share to TwitterShare to FacebookShare to Pinterest
Labels: a dramatic turn of events, dream theater, in waves, tour, trivium