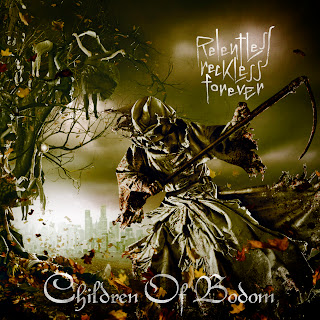 So apparently the last couple days have been all been nominated as "post everything possible about your new album day."  With the likes of Devildriver, Devin Townsend, and Lazarus A.D. having posted new info about their upcoming releases, Alex Laiho and the dudes from Children Of Bodom have now chosen to enter the fray as well.  COB's seventh studio album (as depicted above) is titled "Relentless Reckless Forever" and will be released on March 8, 2011.  You can view the official track listing below after the break.

-Mick
Posted by Brutalitopia at 1:07 PM