When I first decided to do this post every week, the idea was simple: I wanted to listen to more music than I had in years past, and I wanted to write more.  Durf's Weekly Workout is literally just the easiest way for me to do both, incorporating music and writing into my already daily routine of working out.  So now that it's been almost four months, I figured it was time for a check-in from me/update for you on how that's all working out.

As of April 30th, I had listened to 164 albums, EPs, splits, and singles; by the time you read this, there's a very solid chance that I've surpassed my 2020 total of 176 albums listened to.  So it's hard to complain about anything there.  I was curious when I began this quest as to whether or not increasing my musical intake would just lead to my listening to more trash, but quite the opposite has happened.  Sure, there's been a few duds, but the amount of solid or great music that I've listened to this year is almost overwhelming.  My fears of not finding anything new by listening to more music appear to be as dumb as they sound; there is SO MUCH great music being produced right now, and so it makes perfect sense that listening to more music in general would reveal more of that great stuff to me.  I've also become a lot more open to a few genres (hello, grindcore!) that I've normally shied away from, which is definitely a cool feeling.

As for writing, while I could look it up, I'm feeling lazy and this episode of Top Chef ain't gonna watch itself, so suffice it to say that the sixteen DWW posts I've done so far surpass my entire Brutalitopia output for at least the last four years combined.  If I stick with this (which I intend to!) then by the end of the year I think I'll outstrip my entire near-decade of writing for the site, which is an incredible feeling.  It's been a lot of fun sharing these workouts and thoughts on music with you all, and I look forward to continuing on!

Also, as long as we're talking numbers: Doing DWW has lead to a re-dedication to my workouts.  While I'll still take a rest day here and there when needed, more often I'll wake up raring to go, excited to lift and listen to new music and then write about it.  And that excitement in turn has lead to better workouts, which has lead to some incredible results: Since January, I've dropped my body fat percentage by 5%, while increasing my muscle mass by 4.5%.  I feel stronger, I feel like I can see those results, and for the first time in a long time, I feel like I'm progressing in my physical progress, as opposed to just treading water.  So yeah, set goals, follow them, and there will be unplanned benefits.  It's great!  Thanks so much for reading; on to this week's music. 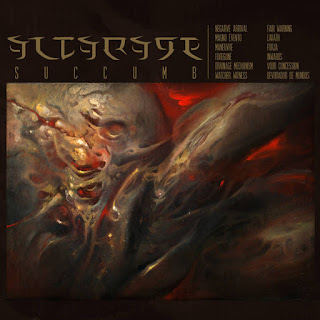 For about forty minutes, I was convinced that I had picked a potential Album of the Year contender for my initial workout for the week.  Altarage brings some incredible dissonant death metal to Succumb, but as the album goes on, the suffocating atmosphere opens up and the music does some incredible things melodically, incorporating progressive and black metal elements to a devastating effect.  It's truly incredible stuff... and then "Devorador de Mundos" happens.  The last song on the album, "Devorador de Mundos" starts off super strong, and then it just goes quiet.  The last fifteen minutes or so just sounds like ambient feedback, and it just killed my motivation for my workout, and really bummed me out.  Succumb was so close to being almost perfect, and there's still a whole lot to love about it, but man, that last track just wrecked me.  Succumb came out April 23, and despite "Devorador de Mundos," you should check it out. 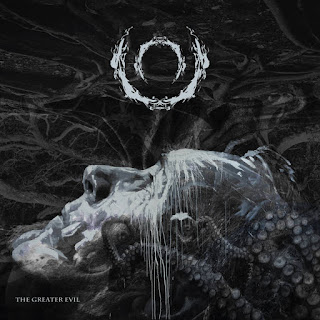 Yesterday the Durfette and I had to put down our 5 year old dog Phoebe due to complications from lymphoma.  It was absolutely gut-wrenching getting the diagnosis in early February; the last two months have essentially functioned as a twisted countdown to this moment, with tiny little distractions like a new baby or a hospital stay sprinkled in here and there.  And even though this was the right decision, when I got up to lift and headed downstairs, I just instinctively looked to the left, expecting to see her on the couch, ready to either come with me to go outside, or just yawn and go back to sleep.  Not seeing her there hit me really fucking hard, and I almost lost it.  So when I got to the garage I just scrolled through Bandcamp looking for anything that sounded bleak and desolate, and ColdCell caught my eye.  The Greater Evil is exactly what I was looking for today, and while I'd need to listen again to give you many details of the music itself, I will say it gave me an incredibly cathartic workout experience that I honestly wasn't expecting to have right now.  The Greater Evil was released April 23rd. 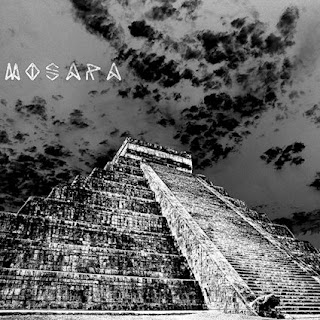 When I clicked on this promo email to check it out, I was immediately drawn to the phrase "a perfect example of atavistic doom metal."  Once I saw that, I knew what I had to do, and I looked up "atavistic."  It means "relating to or characterized by reversion to something ancient and ancestral."  So once I knew that, I was all over Mosara's self-titled album.  Atavistic is a great word for the doom the band makes; "shamanic" also came to mind repeatedly over the album's eight tracks.  The songs on Mosara feel fresh and invigorated, yet also carry with them the sense that they are older than time itself.  "Primitive" or "primordial" don't really fit, because it's not like the tracks harken to a certain era; I feel like if you dropped this album at any point in human history, people would listen to it and just understand that it encompasses universal truths that have been a part of civilization since before civilization.  Like they don't belong to any one part of time, but to all of time, y'know?  You have no idea what I'm talking about?  Well, fuck, then just, like, enjoy the wicked groove that opens up "Cypher."  Mosara drops May 28th on Transylvanian Records; pick it up then and you'll understand what I'm rambling about. 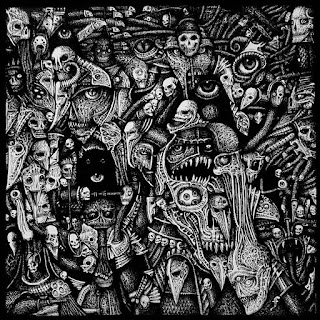 In the immortal words of Harry Caray, hoooooooly cow.  I initially listened to Hell is Full on my lunch break yesterday, because that's as good a time as any to squeeze in an EP listen.  I was immediately hooked and all about it, so much so that as soon as it was over I sent it to Mick and Tom because I thought they would dig it.  Then I kept thinking about it, and so when I woke up ready to go on Thursday, there was only one choice.  This is fast, energetic, just fucking fun death metal, and even though it's only 22 minutes, these Australian maniacs pack that runtime with everything they can; when it ends, you want to hear it again.  In a year that has seen quite a bit of great death metal (cosmic, murky, or otherwise), Bog Mönster have thrown their name into the hat with an absolutely stunning EP.  Hell is Full came out April 26th, and I really hope the band is working on a full-length right now, because I need more of this. 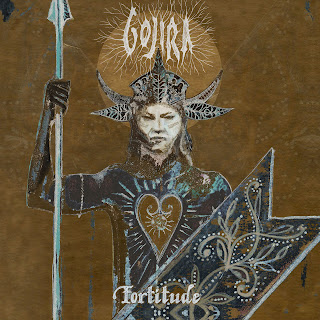 This record has been out for a week now, and I've listened to it four subsequent times after this workout.  I have seen some, ah, takes on this album.  It is nowhere near as bad as the morons who say it's terrible say it is, nor as good as the sycophants who want another classic Gojira album are clamoring for.  I like this album a lot, it's probably my favorite non-Mars/Flesh album from the band, and the back-to-back song duo of "Fortitude"/"The Chant" is one of my favorite musical moments of the year.  I was talking to a friend after the third single "Amazonia" dropped from Fortitude (which I dug), and I said that at this point, all I want out of bands I love is music I want to hear again.  As noted above, I finished April having listened to 164 albums; there is SO. MUCH. FUCKING. MUSIC. out there, and not all of it is going to be the best thing a band has ever done.  Tom reviewed the album over at his side hustle, and he made some good points about this you should read (in the interest of full disclosure, he's also wrong as shit about "Fortitude"/"The Chant")  To judge a band on the two all-time, unimpeachably classic albums they made over a decade ago just seems asinine to me.  There's a lot of good stuff on Fortitude, and even a fair amount of great stuff; hopefully people will stop trying to fit the album into some sort of narrative and just enjoy it for what it is.  Fortitude came out last Friday.

After a weird start, a pretty great week of music!  Previous DWW album's out today are:

Have a great week; see you next week!
- Durf
Posted by Brutalitopia at 9:41 AM