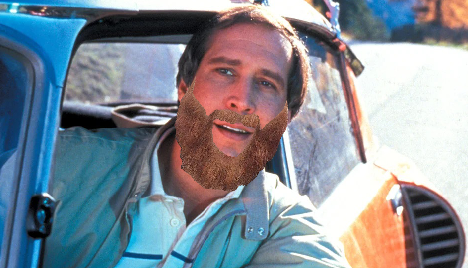 This past Saturday, I drove from Middleton, Idaho, to Little America, Wyoming, to get a dog.  It was a 940 mile round trip.  It took me thirteen and a half hours.  During that time, I listened to a lot of things, which I will now tell you about.

Unlike the last time I posted about what I'm listening to, in this post I'll talk a little about my reactions to the things I listened to, the vast majority of which were completely new to me and heard for the first time while driving through the scenery of big sky country.  Also, for the most part, I'm listing them in the order I listened to them on the drive.  I think.  My recollection is slightly fuzzy, but who cares; I've rarely been a reliable narrator before, so why start now.  Onward!

Lustre - Another Time, Another Place (Chapters One and Two)

I discovered Lustre last week, after discovering An Autumn for Crippled Children earlier last week and inhaling their discography.  As a huge fan of Deafheaven, I'm appalled at all of you for not telling me about all these other shoegazy, only sort of black metal bands.  You should be ashamed of yourselves.  Anyway, the seven songs on these two albums took up almost an hour and a half of drive time (important!) and were perfect for a hot cup of coffee and watching the first rays of daylight peek over the mountains as I began my journey.

I'd been hearing all sorts of good things about this one, and it definitely lived up to the hype.  Sort of.  A lot of what I'd read about this album mentioned it being grind, and I didn't pick up on that at all.  So now I have to go back and re-read everything I've read about Devouring Ruin to see if quarantine has warped my already limited reading comprehension abilities, or if I have to reassess what I think is or is not grind.  Whatever, "Torchbearer" is a gnarly fuckin' tune.

I'm a big fan of the band Thrice, and I follow their drummer Riley Breckenridge on Instagram.  He talks a lot about baseball and music, which are things I also like.  He's mentioned this band a bunch, and I figured that having nothing better to do I would check them out.  I didn't love the vocals, but the music was absolutely incredible, to the point where I will definitely check out another album by them the next time I'm stuck in a car for the better part of a day.

I have no idea where I heard of this band or why they were on my radar, but the first, like, two minutes of the first song are almost silent, to the point where I wondered if anything was happening.  If after reading that, you said to yourself "Oh, this must be some sort of ambient, drone band," then you'd be 100% correct.  That said, once the music started it was really good stuff.  Very captivating.

The Ditch and the Delta - S/T

At this point I realized I was in Utah, so I decided to listen to this band from Utah.  I've got a review of this album coming out at some point, so I don't want to spoil it, but holy fuuuuuuuck does this record rip.

I have no idea how this band appeared to me either, but they sound like Fleet Foxes got indoctrinated into a cult and I am goddamned HERE for it.

Solothus - Realm of Ash and Blood

I was not feeling this one.  Seemed like pretty solid, interesting death metal, but I just wasn't feeling it.  I plan on revisiting it whenever my gym opens back up though.

I never seem to make it a point to seek out BDM, but every time I listen to them I enjoy it immensely.  Verminous is no different.  If you don't like the band, it won't change your mind, but if you even sort of kind of maybe do, I think you'll dig it.

Phone Call to Mick, where I told him the exact same thing I just wrote about The Black Dahlia Murder

I love this album, and I listen to it with a glass of scotch every year the first time it snows.  It also popped into my head as something that would be a perfect soundtrack to driving in the mountains, which it was.

The Ditch and the Delta - S/T

Yep, I listened to it twice.  Stiiiiiiiiiill fuckin' rips

An Episode of The Dollop

The Dollop is my favorite podcast.  It is also the only podcast I listen to.  If I listened to more, I'm pretty sure it would still be my favorite.  It's an American History podcast, and it's really funny.  The first time I heard it, I was driving back from Fire in the Mountains two years ago, and I almost had to pull over because I was laughing so hard I was crying and couldn't see.  This was the newest episode, and it was very funny, but not quite almost pull over funny.

Panopticon - The Scars of Man on the Once Nameless Wilderness, Part I

This album came out right after the Durfette and I moved from Chicago to Idaho, and I will always associate it with our new home.  It's also one of the best albums I've ever heard, and easily one of my Top 10 All-Time picks.  I was going to listen to Part II as well, because the whole album experience is amazing (and two hours; remember, drive time), but then...

A Phone Call With One of My Best Friends, Who Was Stoned and Drinking Whiskey While Watching Tiger King On Mute With German Subtitles in An Effort to Learn German

Yeah, it was a good drive.

Posted by Brutalitopia at 9:00 AM