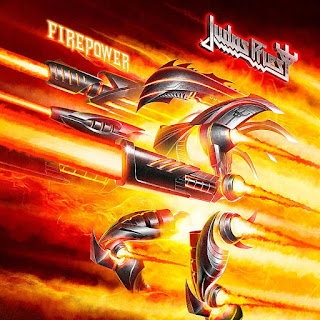 The following is my personal journey with Judas Priest from beginning of fandom to today. I found the path toward Firepower to be a therapeutic journey seeing as Judas Priest is one of the bands most responsible for who I am as a music listener today. So here goes nothing.

My journey with Judas Priest started back in 2001 on the soundtrack to 2001's acclaimed racing simulator Gran Turismo 3: A-Spec with a track called 'Turbo Lover' I knew nothing of the band at the time but the song was fun and I was 14 so my attention span was sparse at best. Again the band came to me in small doses over the years with my brother occasionally playing 'Living After Midnight' on his computer speakers after a late night bender. Finally Guitar Hero was there to thrust the band upon me again with 'You've Got Another Thing Comin'; with my interest in music hitting a fever pitch I eventually purchased my first Priest album: Screaming For Vengeance in June of 2007. I was immediately sucked in by the likes of 'Electric Eye' and the title track on top of what I knew already. I was hooked and haven't looked past that turning point since then.

I eventually started knocking down album after album from British Steel, Hell Bent For Leather, Sad Wings of Destiny, Stained Class, Painkiller, Sin After Sin, Defenders of the Faith, and eventually Point of Entry. With the last purchase not withstanding it was an absolute whirlwind of riffs and dual guitar leads and Rob Halford's herculean vocals. Then Nostradamus came out; the first new release since I dove into the band; nearly 2 hours and there wasn't much substance to be had. However in a move that once again redeemed (no pun intended) the band; they supported the band a few months later in a short run called the Metal Masters Tour.

For those of you who weren't lucky enough to attend one of those shows, it was quite a sight to behold. Testament opened the show and was quickly followed by Motorhead, Heaven & Hell, and closed out by Priest who wisely only played one track from their new album and hit nearly every right button from start to finish (setlist here). It was a night surely not to be forgotten and that goes even without saying it was the only time I ever saw Dio and Lemmy perform.

During the time between Nostrdamus and Redeemer of Souls I revisited many of the albums over and over again and ended up with new favorites and renewed appreciation for a band that is without equal. I don't remember much about Redeemer other than it was long but not as egregious as its predecessor and that the band hadn't quite gelled after the departure of 1 K.K. Downing. I honestly haven't even felt comfortable reviewing any of their new material since I have been a fan, because I wouldn't have many nice things to say; however in 2018 the times they are a changin'.

Firepower represents the beginning of a new age for the band that once again feels cohesive and is able to stand alongside some of their best work and just to get this out of the way finally, their best album since 1990's Painkiller HANDS DOWN! From the very outset Rob Halford who is now 67, sounds renewed and refreshed the guitar section of Glenn Tipton and Richie Faulkner are vintage Priest. If Halford hadn't left to form Fight after Painkiller in 1992 this would have been the logical musical direction for the band.

As for the album itself it is powerful from start to finish, whether it be the band going full force on songs like 'Firepower,' 'Lightning Strike,' 'Evil Never Dies,' and 'Flame Thrower,' or slowing things down on 'Never The Heroes,' 'Rising From Ruins,' and 'Spectre' (which could be a cut from Stained Class), it's all so masterfully executed you can't wait to hear what's next. Firepower is a band rediscovering their sound again after many years, and just going for it. With Andy Sneap on production, the band was more than in capable hands as he has eked out some of the best work for a myriad of bands, such as Opeth, Killswitch Engage, and Carcass to name a few.

For a band that has been at it for as long as Priest has, it is amazing that they had so much left in the tank with album number 18. Even Iron Maiden and Metallica's recent work doesn't seem like they have met what appears to be the universal praise that Firepower has started to attain. I admit when initial word got out that this album was a tour de force, return to form for the band, I was quite skeptical; however I didn't let myself fly too high and have been spinning this record nonstop since release day. Welcome back Judas Priest, let's keep the trend going, heavy metal still needs you.