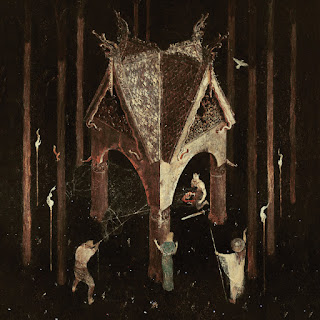 Since their phenomenal debut Diadem of 12 Stars in 2006, Wolves in the Throne Room have been a force in the US black metal scene.  Their songs, drawing inspiration from the band's home in the Pacific Northwest, have always blended a serene sense of melody and atmosphere with a primal, animalistic fury.  In the ensuing decade, "atmospheric black metal" has become the genre du jour, but for the most part, these bands have been chasing WitTR's tail, trying to capture the alchemy that makes Diadem, Two Hunters, Black Cascade, Celestial Lineage, and the Malevolent Grain EP stand out in a sea of imitators and lesser bands.  Wolves in the Throne Room took a bit of a detour for their last album; 2014's Celestite was an ambient, synth-heavy companion to Celestial Lineage, and while it wasn't bad, it was certainly a departure from the band's trademark sound.  So now, three years later, after a re-release of Diadem of 12 Stars, the band has returned with Thrice Woven, an album they say marks their return to black metal.  So does Thrice Woven hold up to the band's impeccable track record in their home genre?

"Born From the Serpent's Eye" bats leadoff, and is the platonic ideal of a Wolves in the Throne Room song.  Beginning with a simple, but catchy, melody, which is then drowned in a wave of furious riffs and blast beats, "Born From the Serpent's Eye" is the perfect track to begin Thrice Woven.  Nathan Weaver's vocals have long been one of my favorite parts of the band, and he's in top form here, while brother Aaron continues his work as one of metal's most underrated drummers.  Something odd happens toward the middle of the song, however: just before Anna Von Hausswolf arrives to lend vocals, the track cuts out.  It just flat out stops.  Then it picks back up with some twinkling keys and Von Hausswolf's gorgeous vocals, before the guitars and drums come back.  It's a fairly jarring effect, and not really in a good way.  Wolves in the Throne Room have moved from heavier passages to ambient ones continually in their career, and have an amazing track record of incorporating absolutely sensational female vocalists to great effect, so it was weird to hear the transition in "Born From the Serpent's Eye" sound as clunky as it does.  The song is still fantastic, it just pulled me out of what is typically an all-encompassing ambiance.

"The Old Ones Are With Us" begins with Neurosis' Steve Von Till whispering over the sounds of a fire and a strumming acoustic guitar before the song jumps up to a mid-tempo black metal jam.  "The Old Ones..." is really the first time on the album that newest band member Kody Keyworth gets to shine; his keyboards really push through the mix and give the song an element that it would sorely miss without him.  Von Till returns in the middle of the song, and while I was initially disappointed that he's on the album as "solo/Harvestman SVT vs Neurosis SVT," his acoustic guitar and raspy whispers about the coming of spring fit "The Old Ones Are With Us" perfectly, adding dimension and weight to the song without overshadowing the whole.  If "Born From the Serpent's Eye" was a typical Wolves song, then "The Old Ones..." find them exploring different aspects to their black metal sound.  "The Old Ones Are With Us" has a very Agalloch feel to it, which is different for WitTR; despite their similar geographic locations and natural influences, there's never been much musical overlap between the two American Black Metal icons.

"Angrboda" is a pensive track that uses its softer, synthy middle passage to great effect; the driving, steady tempo of the band afterward is one of the coolest moments they've done.  Given how different the three parts of the song are, I did wonder if that was an intentional move by the band relating to Angrboda's three children: in Norse mythology, Angrboda was a giantess who had three children with Loki: Hel, goddess of death and ruler of... well, Hel; the great wolf Fenrir, foretold to kill Odin (also depicted on Thrice Woven's cover art); and the giant, terrible serpent Jörmundgandr, cast in to the ocean and destined to bring about Ragnarok when it releases its tail.  I'm sure this is a reach on my part, but if nothing else, it's always cool to read some Norse Mythology with your morning coffee. 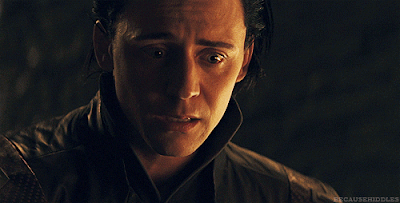 You'd think he'd have thought about birth control after the wolf...

"Mother Owl, Father Ocean" is a soft, ethereal interlude track that sort of stands on its own, but ultimately feels like it could have been folded up into either the preceding or following track as an outro/intro; either way, it's a gorgeous piece of music.  "Fires Roar in the Palace of the Moon" is an excellent album closer, tying together Thrice Woven nicely.  Ultimately, Thrice Woven finds Wolves in the Throne Room back in their black metal element, doing what they do best and making thoughtful, meditative black metal that's ultimately engrossing and intense.


There's an easy - and admittedly lazy - comparison for Thrice Woven in Kodama, last year's "return to form" album from French blackgaze virtuosos Alcest.  Much like Celestite, Alcest was coming off Shelter, a dreamy, sunny shoegaze album that eschewed the sounds that made them (and they made) famous on their previous albums.  And then Kodama, like Thrice Woven, saw the band return to their blend of black metal.  Like I said, lazy.  But just because it's lazy doesn't mean it's wrong, and the comparison is certainly aided by Thrice Woven, like Kodama, being really, really good.  Wolves in the Throne Room have added another sterling chapter to their legacy, and even in a year jam packed with incredible black metal, Thrice Woven finds the band jockeying for position at the forefront of the pack.

Thrice Woven is out now via Artemisia Records.

Posted by Brutalitopia at 10:16 AM