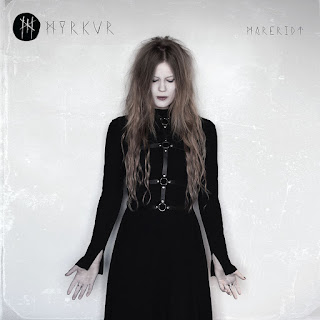 I know it may be hard for some of you to believe that polarization exists within the metal community, but Myrkur has perpetually been in the cross-hairs ever since the self-titled debut EP. Black metal is perhaps the murkiest of purist waters you can try to stay afloat in, but Amalie Bruun's solo project has been gliding through these waves since day one. While the approaches differ, Myrkur brings to mind bands like Alcest and those who followed in the "blackgaze" craze. Myrkur sticks closer to maintaining the rawness of traditional black metal, but like Alcest, there is an even mix of serene melodies to juxtapose the harsher tones. The only complaint I've ever had with Myrkur's output is that I've never been captivated by a full release. It's as if after every listen, I find myself thinking about the album's "what could have been" potential more than anything else. Unfortunately, Mykur's latest album, Mareridt, follows suit in this trend.

The album opens with Bruun's angelic voice chanting to an almost church-like cadence, albeit with a more ominous background. This leads into "Måneblôt," one of the strongest tracks you'll hear on Mareridt. By interweaving a common melody between unrestrained vocal shrieks, tenacious black metal guitar shredding, soft humming, and violins, the track represents Myrkur at their finest. Despite the strong opening, the album quickly turns into Chelsea Wolfe-worship. "The Serpent" is built on a heavy, brooding repetitive guitar riff and vocals that have an echoing quality that make it sound like the singer is either trapped-in or is falling down a well. This isn't necessarily a bad thing but it's strange when a track sounds like more of a Chelsea Wolfe tune than the track, "Funeral," that actually guests Chelsea Wolfe. The rest of the album features more of the same, with "Crown" and "Ulvinde" being standouts by showcasing the infectious nature of Bruun's vocal harmonies. The true low-point of Mareridt comes in its closing. The last two tracks are outro-type tracks, which in and of itself is a no-no. The worst part, however, is that the very last outro track, "Børnehjem," features a spoken-word passage that's done in a high-pitched chipmunk tone. The actual lyrics are creepy enough, but the tone is hard to get by without laughing and being completely removed from the high points of what you heard earlier in the album.

Even with the lukewarmish tone this review has emoted, I should stress that Mareridt is still an album that you should listen to all the way through at least once. Like all of Myrkur's previous work, there will be tracks that are instant highlights but the overall listening experience falls a little flat. There will be moments while listening that you will realize that Bruun's feminine take on traditional black metal is near-perfect while there are other moments that detract from that. We're unfortunately still stuck waiting for that all encompassing Myrkur album, but those aforementioned near-perfect moments will be enough to keep getting us through.