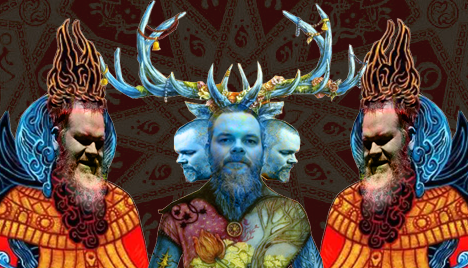 You may have heard there's a new Mastodon album coming soon.  Emperor of Sand will be released March 31, and the three advance tracks have me excited for a 'Don album for the first time in what feels like forever.  In anticipation of the new record, I've been listening to a lot of Mastodon, which inevitably means I'm hearing some Scott Kelly.  The Neurosis co-frontman and guitarist has appeared on every Mastodon album since Leviathan (and has confirmed an appearance on Emperor of Sand), and his presence typically results in his track being one of the stand out songs on the album.  So I decided to rank Kelly's Mastodon collaborations and ruminate on each one, if only because March 31 seems like too long to wait to write anything about Mastodon.

"Spectrelight" isn't a bad song in the same way The Hunter isn't a bad album: it has some fun riffs and some catchy hooks, but the best parts are all things Mastodon has done before (and better) and the new directions as related to previous albums are nowhere near as enjoyable as the new directions on Blood Mountain and Crack the Skye.  So when Scott Kelly shows up in "Spectrelight," it's the only time in Mastodon's discography where his inclusion feels more like an obligation than an optimized opportunity to push a song to another level.

4. "Diamond in the Witch House" - Once More Round the Sun

Once More 'Round the Sun is probably my least favorite Mastodon album, but even so, it has a few great moments, and "Diamond in the Witch House" is one of them.  A (relatively) slower, psychedelically trippy jam, the track swings pretty close to Neurosis territory at the end, and as a result Kelly shines while doing his thing.  I'll admit to not listening to Once More... very much, so it had been awhile since I'd heard this one, but upon re-listening, I really, really dig it.  That whole album should have been like this.

The song that first introduced me to Mastodon by way of that incredible Brann Dailor drum intro and instant-head bang first riff takes its time in giving us its featured Scott Kelly moment, but when it comes, it unleashes him in a monstrous fury.  Often in Neurosis, Kelly's vocals can get lost as just another amazing piece of the best puzzle you'll ever put together, but on "Crystal Skull" his roar cuts instantly through the music to stand the hair on the back of your neck on end.

2. "Aqua Dementia" - Leviathan
Widely hailed as a masterpiece (yes) and Mastodon's finest hour (no), Leviathan is regardless a stunning album that has some of the best metal songs of the 21st Century.  "Aqua Dementia" is, in hindsight, perhaps the first sign that Mastodon was going to move past their Remission-sound, as the weirdly psychedelic riffs of Bill Kelliher and Brent Hinds noodle a bit over Troy Sanders driving bass and Brann Dailor's pounding drums in the beginning, before bringing it back home later in the song.  Brent Hinds leads off on vocals, delivering some of his best work over the swirling maelstrom of sound Mastodon creates.  Yet even as the band keeps the pace down during Kelly's initial vocals, the sheer weight of his bellows seems to draw the song closer to a sludge-tempo than the upbeat thrash it leans toward.  By the time they slow it down in time for Kelly to bellow "And God will watch it burn," "Aqua Dementia" becomes a hurricane in slow motion, with Kelly's voice featuring as the wind and thunder both.

The creme de la creme of this collaborative partnership, the title track to Mastodon's 2009 masterpiece and best album (fuckin' fight me) features Kelly in a prominent role, as he takes over all of the verses.  His bellows are put to great use, juxtaposed as they are with Sanders' and Dailor's more pleading vocals.  As my buddy Nick put it eight years ago: "When that fuckin' guy from Neurosis shows up on 'Crack the Skye...'  goddamn, man."  He isn't wrong.  "Crack the Skye" would be an emotionally draining, gut-wrenching song thanks to Hinds' and Kelliher's excellent guitar work, but Kelly puts it over the top, which is why it's the best song he's done with Mastodon.

- Durf
Posted by Brutalitopia at 8:32 AM

Email ThisBlogThis!Share to TwitterShare to FacebookShare to Pinterest
Labels: 2017, blood mountain, Crack the Skye, Durf, emperor of sand, leviathan, Mastodon, neurosis, Once More Round The Sun, scott kelly, the hunter