The Great Old Ones - EOD: A Tale of Dark Legacy 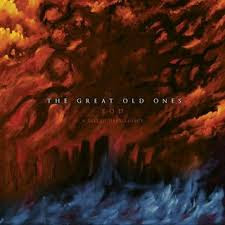 I've been hearing about EOD: A Tale of Dark Legacy, the latest release from French black metal outfit The Great Old Ones, from other metal bloggers and fans for what seems like forever.  The hype around this album is real, and while I'd never heard of the band before catching an advance track for this album, I'm a sucker for hype when I know nothing about the band.  So I decided to check it out and see if the hype was justified, or just a bunch of noise.

"Searching for R Olmstead (Introduction)" is a 25 second track, but it jams its runtime with all of the spooky vibes the rest of EOD: A Tale of Dark Legacy features prominently.  It's rare to find an introduction track like this that doesn't seem better served folded in to the next track, but The Great Old Ones make this separate track feel worth it, leaving you with a chill on your spine before kicking things off in earnest with "The Shadow Over Innsmouth."  That track is an absolute monster, blending black metal ferocity with some ISIS-like post-metal passages that evoke a sense of grandeur within the terror.  There's a palpable sense of unease and disquiet when "The Shadow Over Innsmouth" takes its breathers, and over the course of its nine-plus minutes, it manages to completely engross you in atmosphere and mood.  In that respect, "When the Stars Align" is a fairly straightforward black metal track, although a very, very good one.

"The Ritual" opens with a tremendous and foreboding drum pattern, where drummer Léo Isnard absolutely brings it.  Like the majority of the performances on EOD: A Tale of Dark Legacy, there's little flashy or superfluous about Isnard's drumming here; it just perfectly establishes the tone The Great Old Ones are seeking to create, drawing you further in to the album.  From the thunder of the drums, shimmering guitar tones emerge, ebbing and flowing in urgency, before the vocals of Benjamin Guerry and Jeff Grimal arrive to lay waste to your ear drums.  "The Ritual" continues and expands upon EOD: A Tale of Dark Legacy's shift toward being something more than black metal that "The Shadow Over Innsmouth" hinted at; for much of it's run, "The Ritual" chugs along like a vintage Pelican track.  It's a testament to the band, especially guitarists Guerry, Grimal, and Aurélien Edouard that these shifts are never distracting, never remove you from the moment.  By the time "The Ritual" reaches its post-metal apex, you're left wondering what else you could possibly hear these musicians do.

It's in this space that the interlude track "Wanderings" makes its way; that's right, EOD: A Tale of Dark Legacy spends under two minutes on an intro track, AND an interlude, and they knock them both out of the park.  I've been critical of interlude tracks before, but The Great Old Ones seem to know what they're doing, using "Wanderings" to keep the tension high while a spoken voice continues the narrative of the album (possibly text from the Lovecraft story upon which the album is based?).  With the tension still high, "In Screams and Flames" is truly a vitriolic wonder of hopelessness that manages to feel outright scary in places as opposed to the general sense of dread encountered throughout the rest of the album.  Musically, "In Screams and Flames" doesn't stick with me the way some of the other tracks do (well, except for that siiiiiiiick wailing guitar at the end), but it definitely makes an emotional impression.

An apocalyptic combination of black and post-metal, "Mare Infinitum" hurls you into a hurricane of oblivion that will leave you breathless, and is obviously an incredible song on its own, but after listening to it in sequence as well as on its own, there's no denying that it gets a boost from the acceleration of the tracks leading up to it.  "Mare Infinitum" is the best song on the album, the absolute zenith of everything The Great Old Ones have been building toward on EOD: A Tale of Dark Legacy.  Part of the fun of concept albums is experiencing them as a whole package, digesting them in one sitting the way you'd read a book or watch a movie, and while "Mare Infinitum" is a tremendous piece of songwriting, it's fit into the larger narrative of EOD: A Tale of Dark Legacy is arguably its more impressive feat.  "My Love for the Stars (Cthulu Fhtagn)" closes the album; it is the inhale of a cigarette after the passionate, sweaty sex of "Mare Infinitum," a denouement of acoustic guitars and whispered vocals that are tender and pensive, before releasing one final, terrifying moment of beauty.

Sometimes it can be easy to overthink whether or not you should check out an album.  After all, your time is valuable, and there are SO MANY bands and albums to look into.  Not to mention you need some time in your life to drink beer and bone hot ladies or fellas and eat buffalo wings and watch prestige television.  Oh, and probably a bit to work.  And to call your mom.  Point is, with all the music options out there, sometimes its easier to talk yourself out of listening to something than it is into listening.  Here is where EOD: A Tale of Dark Legacy makes things easy for you.  Concept album?  Check.  Black metal with twists?  Check.  Cthulu? (with apologies to friend of the Töp Joseph Schafer... just kidding; fuck that guy ((but with love!)). Super check.   EOD: A Tale of Dark Legacy is an absolute monster of an album, and old god that churns with fury and proves it is more than up to the task of competing with humanity's newer deities, an album that absolutely lives up to the massive, seemingly insurmountable levels of hype around it.

Posted by Brutalitopia at 7:48 AM