Yeti on Horseback - The Great Dying 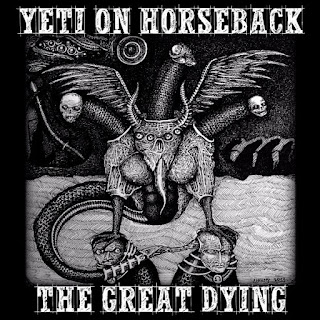 Let's get the easy out of the way first: Yeti on Horseback is a transcendent fucking band name.  It is the LeBron James meets Barry Sanders meets Mario Lemieux meets Ted Williams of band names.  It's cool as hell, sounds great to say out loud, and also tells you exactly what this band is going to sound like.  And their debut album, The Great Dying, is similarly exquisitely titled (and has some truly redankulous cover art.  But because we've all been taught not to judge books by their covers (so to speak), none of this would matter if the music Yeti on Horseback makes on The Great Dying isn't good.  So do the tunes equal the band's name and album title?

Unequivocally, the answer is yes.  "Tree of Death" kicks the album off with a spacey, ethereal bass line and cymbal fills straight out of a science fiction movie, before turning the ominous feelings up all the way and bringing in the crushing doom.  The dichotomy between stoner pensiveness and headbanger-friendly riffage is one that Yeti on Horseback spends most of The Great Dying exploring, sonic experiments that consist of packing and clearing as many bowls as you can before starting a fistfight with a horde of angry frost giants.  "Viking Mushroom Tea" follows the trend of living up to its name, juxtaposing fierce, brutal doom riffs with a mellow, stoner groove that really makes you want to fuzz up reality and get lost in the cushions of your sofa while listening.  While Yeti on Horseback doesn't quite meet the divinity of say, Neurosis, when blending heady, thoughtful moments with sheer brute force, that's only because no one can equal Neurosis; that Neurosis is even brought to mind when listening to The Great Dying is a testament to its power.

"Fables and Lies" begins with an intro that utilizes a church bell to great effect; the first three minutes of the song are so obviously building toward something that it's a genuine shock when everything drops out, and then a quiet, almost inaudible bass line picks up.  In fact, that's a fairly common theme throughout The Great Dying; it stays within the lines of a lot of genre tropes, and as soon as you're sure you know where a song is going, the band turns those tropes on their head by doing the opposite.  "Lynch (A Prelude)" is the album's weakest moment, an interlude track that sounds like a bunch of sampled audio clips running one after another.  It fits within the album atmospherically, but it can't help but feel like it's keeping you from the good stuff (like a lot of interlude tracks, to be fair).

Speaking of the good stuff, "Elephant Man," the album's best track, emerges from the interlude ready to rock and roll.  Featuring the most acrobatic guitar work The Great Dying has to offer,  "Elephant Man" is a true, high-energy stoner doom tour de force.  The female backing vocals at the end of the song are simultaneously gorgeous and foreboding, and truly give the song an emotional weight to match the near-physical aural heaviness of the track.  "Dragged Down to Hell" is exactly what it sounds like, a despairing cacophony of swirling darkness moving at a near glacial pace that under the right circumstances I'm sure would seem to last forever.

The Great Dying reminds me a lot of the first time I heard Eagle Twin's The Unkindness of Crows.  While there are similarities in the music, the comparison is more about the approach each album takes toward doom metal.  It feels like a cop out and an understatement to say that Yeti on Horseback has put their own spin on doom (because isn't that what all bands do?), but that doesn't mean it feels wrong, either.  The Great Dying is yet another great album in a year full of great albums, and Yeti on Horseback is absolutely the most spectacularly named band that's worth keeping an eye on.

Posted by Brutalitopia at 2:21 PM