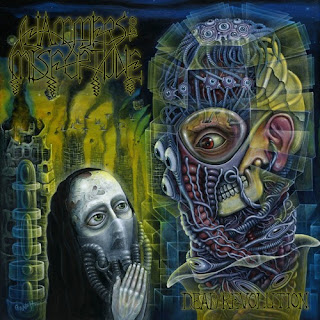 Hammers of Misfortune continue to tow the line for so many great metal bands; Slough Feg's affinity for all things Celtic, the keyboards of ELP and Yes, and the absolute storm of guitar work which pays homage to Queen's Brian May's harmonics, then puts them over the top. It has been 5 years since their spectacular 17th Street was released and not a moment too soon. Dead Revolution continues where the band left off; making music for everyone in the rock spectrum, that just so happens to be metal. The band has been busy with many side projects such as Vhol and Vastum as well as adding a new bassist and a drummer in the interim. So how does this all shake out into one package?

Vocalist Joe Hutton hits on the more epicly-styled vocals throughout the album as his strange and soothing style suits this multi-faceted band quite well. The rhythm section of John Cobbett and Leila Abdul-Rauf blazes a path all their own hitting fast and technical sections and also slowing down with great aplomb. It would be unfair to not mention the Jon Lord-esque Sigrid Sheie; she tickles the ivories effortlessly. Whether she be a central figure in the foreground or cast to the background, she always makes her presence felt.

The album's title track is almost the perfect Hammers song as it blasts through the door with fast riffs and herculean keyboards, humbly balanced by Hutton's vocals. The entire band is on display here, this is meat and potatoes Hammers, certainly a song chock full of hooks to get listeners into their deeper cuts. Speaking of deeper cuts "The Precipice (Waiting for the Crash...)" certainly fits the bill. An 8 minute epic, with plenty of keyboard interludes, which give way to riffs that speed along throughout. The backing vocals here add a more haunting vibe to Hutton's croon, as a riff that could be from a Deep Purple song comes hurtling headlong into earshot. Songs like this are "Progressive" in the sense of the '70s and not something written by a band without knowledge of early progressive rock. Listening to the band make an old folk song new again on "Days of '49" will give you chills.

The key with Hammers of Misfortune is their impeccable balance between all of these multi-talented artists; they all bring a little bit of a different flavor to the table and when it is truly in balance throughout an entire album, it is quite a sight to behold. I'm not sure why it is a Dead Revolution but this sound is a huge revelation that many can and should get behind. With all that being said, Hammers have delivered a fine heavy metal album with odes to the past, as well as plenty of signature moments for the band since their last release in 2011. This album is an absolute monster in the best way possible and you as a fan of heavy metal owe it to yourself to get this and soon. 2016 is in your debt.