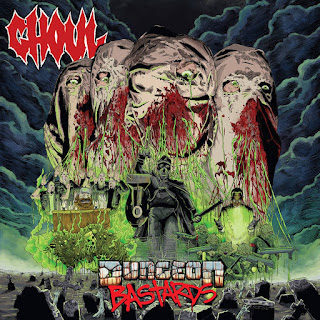 Do you want over the top? Carcass worship? Horror movies? If you said yes to all of the above then you will absolutely love Dungeon Bastards; Ghoul's fifth album and first in five years. The band who also moonlights as Necroticism loving band Impaled, have been using Ghoul as their main vehicle for some time now and will be shedding blood with Carcass, Crowbar, and Night Demon in the near future. The band's previous album Transmission Zero was a bit of a disappointment for those who were expecting them to continue along the path established with their classic Splatterthrash.

The music on this album rarely strays from fast and furious as the energy amps up on "Bringer of War"; this is full on death thrash in the best and most gross way possible, even throwing back to their alter ego's best album Mondo Medicale. The spoken word sections are particularly great as it almost takes on the fear away from the main maniacs in the fray. The album as a whole sounds like if Bill Steer were playing in a more punk outfit than Carcass and a less crusty version of Napalm Death; a middle ground that has taken a few albums to balance out.

This Creepsylvanian quartet blasts through the title track with speed and precision much like the medical tools and sociopaths they refer to in the lyrical content. The Middle Eastern riffage on 'Ghoulunatics' is reminiscent of the most recent Meads of Asphodel album and goes to show off more influences that can be added to the fracas. There are even flashes of psychobilly standouts The Reverend Horton Heat with some of the background riffs to boot. 'Word Is Law' is a straightforward assault on your neck with mostly yelled (instead of growled) lyrics that follows in the vein of old school thrash.

Ghoul have put forth a new album showcasing an old style of metal done incredibly well and Dungeon Bastards is easily their best work in a decade; possibly their best yet, only time will tell. Catch these guys on tour ASAP.

-Tom
Posted by Brutalitopia at 8:30 AM