Jim Breuer and The Loud & Rowdy - Songs From The Garage 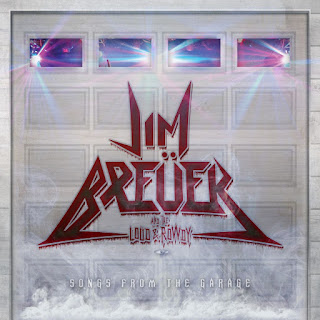 American comedic icon Jim Breuer loves few things. He makes this abundantly clear through his comedy; those things are the New York Mets, Heavy Metal and of course his family. His Facebook page in particular became increasingly more popular in this past calendar year due in large part to his Mets' postgame recaps, wins or losses. His largest impacts on me prior to that were his uncompromising performances in Half Baked and his excellent comedy special Jim Breuer: Hardcore; which is still heavily quoted in my circle of friends. So his family life and heavy metal come full circle here on his debut album Songs From The Garage; a combination love letter to both things and it can be described in one word; fun.

Breuer's tastes are decidedly 'Old School' as heard on the same track with homages to the driving riffs of Accept's Balls To The Wall and Megadeth's Peace Sells... But Who's Buying among others. His family life is key to pushing along the album too as 'Raising Teenage Girls' and 'Family Warrior' make abundantly clear. Lamenting his daughters wearing skirts that might be too short and knowing the parents of a potential male suitor on the former and paying bills on the latter. His comedy combined with heavy metal is in full force on 'Be A Dick 2nite'; about a Hawaiian shirt wearing miscreant who drinks and blasts Slayer around his neighborhood at all hours of the night, on top of calling a bouncer's pregnant wife "fat".

While some might take a glance at this album and pass on it, there is a lot to love here musically too. Former Anthrax and current Volbeat guitarist Rob Caggiano lays down some excellent riffs throughout as well as producing the album. 'Mr. Rock n Roll' features AC/DC's Brian Johnson on guest vocals and the song as a whole feels like a whiskey driven rock anthem. Breuer clearly has had time to hone his chops as he sounds great; all that time in the garage listening to heavy metal over the years has its benefits. For fans of old school heavy metal, played by a huge fan of heavy metal, you'd be hard pressed to find a more authentic homage to the genre than what Jim Breuer provides here. Let's Go Mets!