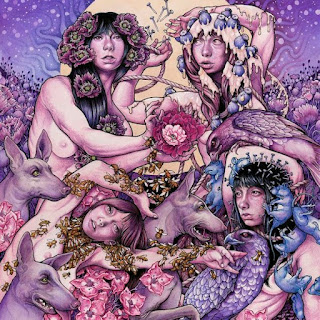 To say that Baroness has been through some things since their last album is a bit of an understatement; after a catastrophic bus crash in England following the release of Yellow and Green in 2012, half of the band amicably left, and lead singer and guitarist John Dyer Baizley had to relearn how to play the guitar after suffering numerous injuries. The band soldiered on, refusing to quit, enlisting new members, and now returns with Purple, an album title that (intentionally or not) brings to mind the physical and emotional bruising the band has been through over the past three years. But like a boxer after being knocked down, bruised and bloody, to the canvas, Baroness got up ready to start swinging. "We didn't want to make a mellow, sad, dark thing," said guitarist Pete Adams. "We needed to be up-tempo. We needed to be melodic, and it also needed to be aggressive." Purple needed, in other words, to be a Baroness album.

Purple certainly kicks off with a bang; the opening riff on album opener "Morningstar" harkens back to the cacophonous days of Blue and Red, and the duration of the track doesn't do anything to dissuade you from thinking Baroness has simply returned to their roots. Yet then "Shock Me" kicks in with keyboards and synths, and melodic vocals, and you start to wonder. By the time "Try to Disappear" drops in, your expectations are shattered, lying on the ground, allowing you to enjoy the rest of the album as it happens, devoid of any preconceived notions. This is obviously a great way to listen to any album, but when a band has been around long enough, it can get harder and harder to do. By the time the ballad-esque (well, for Baroness) "Chlorine & Wine" comes around midway through, you've been through so many types of songs that nothing will surprise you, which is good; two songs later, album highlight "Desperation Burns" shows up to headbang you through a goddamn wall.

Production in music is a lot like lyrics; I don't tend to pay attention to either unless they're exceptionally great or woefully awful. Unfortunately for Purple, the production is woefully, inexplicably terrible, detracting from a group of undeniably catchy and amazing songs by making them all sound staticky and muddled. I can't say that the production issue renders Purple unlistenable, because it doesn't. What it does do, however, is prevent you from being able to lose yourself in the music completely; when you're constantly asking yourself "Why do the drums sound like one long crash?" or "Why are the guitars pushed so far back?" it's hard to enjoy the sterling musicianship at work. It's akin to George Lucas glossing over Star Wars with CGI muppets in every scene; you can still enjoy the movie, but not without consistently finding yourself wondering "Why would he choose to do this?" I hate to be so negative about the production, but the weirdest part about it is it isn't wholly negative throughout the entire album; "Fugue," a two-ish minute interlude halfway through, sounds crystal clear; no fuzz, no distortion, no anything to take away from the spacey melody Baroness is putting in front of you. "Fugue" serves as a great reminder of what Purple could have been, while simultaneously being infuriating because of what Purple is.

Purple is an exemplary, landmark achievement by a band that no one could have criticized for packing it up and not coming back. It's an album that I want to call a masterpiece, that I want to retroactively add to my Top Albums of 2015, that I want to burn for every member of my family and shout "LISTEN TO THIS!" into their faces. Purple is Baroness at the top of their game; I have no reservations about calling the album the greatest collection of songs the band has ever put together. The band seamlessly and effortlessly blends their sludgy origins with poppier, melodic sensibilities, in the process providing a sonic journal of sorts chronicling where the band has been and where they might be headed. Baroness has managed to turn the corner toward a change in sound that other bands have careened off; they've stuck the landing when so many other bands have fallen on the mat. It's truly a shame that an album this great is stuck with the footnote of such poor production, because at the end of the day, no matter how catchy "Chlorine and Wine" is, nor how headbangingly great the opening riff of "Morningstar," it's not worth much if it's not enjoyable to listen to.