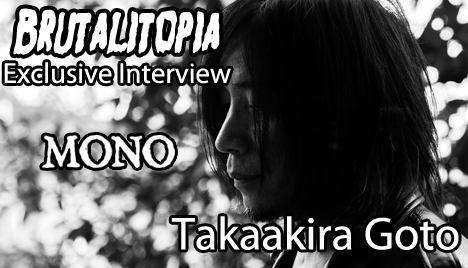 Last Thursday, I was fortunate enough to sit down and talk with Taka Goto, founding member of the legendary Japanese instrumental outfit Mono.  We chatted about the current tour, Taka's view on what inspires Mono's sound, and some of his favorite metal bands.  On a side note, if you have never seen Mono live then please rectify that ASAP.  The band's performance was full of energy and emotion that was captivating on an unprecedented level.

I know you guys have been on the road touring for a while now in support of the new albums.  What are your overall impressions of it so far?

We started the tour for the new albums last September; sometime last summer.  We're a little over half-way done but we still have the rest of America and Brazil.  We're also going to Europe again in the winter. There's also New Zealand. We still have a bunch (laughs). It's been going very well, though.

Since you've played all over the world, have you noticed that certain crowds respond differently to your guys' performances or does everyone just seem to get it the same way?

I would say over the last seven years it's been getting more similar. Everyone is just very respectful and understanding of our music.  I'm very thankful that we get to share that with people through our music.

For the new albums, The Last Dawn and Rays of Darkness, what would you say was different about those albums compared to Mono's previous work?

We had an exact plan to not use so many orchestral elements, which we had done a lot of before. We preferred to make it simple. That was our first vision of them. It wasn't easy, but we felt like we had a free ticket to try whatever we wanted.

Was the double album light vs dark theme intentional from the beginning?

No. We didn't have a plan to do that. I started writing stuff from Rays of Darkness first. I wanted to focus on the dark side first, but it made me feel really depressed writing those songs every day.  But soon after I got an offer to work on a soundtrack for a movie. The script was really great and made me more interested to write more songs again. I solely focused on writing for the soundtrack.  I began to forget about Mono and it became medicine for me. After I finished writing the soundtrack, those songs eventually became The Last Dawn. So once The Last Dawn was done, I wanted to start again with the dark side but I was also scared to go back to that material. But it worked out.

How would you describe the evolution of Mono over the years and how the band has grown for the better?

Well time flies. It's been 16 years and we already have our 8th album out. It's pretty crazy. I remember when we started touring in the states that none of us in the band could speak any English. We also didn't have any tour manager, money, or friends, or anything in the states. And this was all before the internet became big. Having those kind of adventures, though, helped us to grow stronger as friends and as a band. Now people are listening to lots of post-rock but when were starting out it wasn't a very familiar thing. It's very weird. I can feel us getting older as band (laughs) but we're still good and still touring a lot. We've played nearly 150 shows a year for more than 10 years. It's so beautiful to think of how many friends we have all over the world now.

What was your experience with music before starting Mono?

We used to listen to a lot of grunge. I really focused on shoegaze and bands like My Bloody Valentine and Sonic Youth. I also really love the classical music of Beethoven. Classical music has very emotional dramatic structures. As a guitarist, I wanted to combine those two worlds.

Were you ever in a band that featured a vocalist?

On The Rays of Darkness we had a guest-vocalist on one track. He's a singer for this hardcore band called Envy.

You were never in a band with a full-time vocalist, though?

Oh, no. I never really thought about it.

What made you want to do instrumental music as opposed to having a vocalist in the band?

Well it's interesting. Basically, I just don't need it. I've always trusted that there's something that's stronger in the music than in the lyric.

Like you mentioned with classical music, Mono's sound is very emotional and has these very climatic moments. What kind of stories are you trying to convey through Mono's music?

I guess I'm writing the songs to save myself. I'm always thinking that music can save me. If I can write down those songs that can save me, then hopefully they can save someone else too. Our fans are always saying that Mono's music speaks to their troubles. That's so wonderful. It's like the music has been given a purpose.

Admittedly, your guys' latest albums were my introduction into Mono. My immediate reaction was to associate you with bands like Explosions in the Sky. Have bands along the way, like Expolosions in the Sky, influenced you guys to keep that sound or was it always natural for Mono to sound like that?

We were actually just hanging out with Explosions in the Sky last night (laughs). When we started the band in 1999, it was mainly us Mogwai and Godspeed that could be considered post-rock. We listened to Explosions in the Sky and contacted their label and eventually became good friends with them by 2002/2003; so we did kind of grow up together as bands with similar styles. I never really cared about the "post-rock scene" though or having that label. As long as the band and music is good, that's all that matters to me (laughs).

I've always been curious with instrumental music whether bands title their albums/songs first and then structure the music around the title or the other way around. What's your guys' process for that?

Titles change all the time. I always put a temporary title on it to start off.

Are those temporary titles ever similar to the final titles?

No (laughs). I'm really not good at titles at all. I'm always collaborating with someone. But yeah, that's the end of that (laughs).

You still have a lot of touring left, but are there any plans set for guys after that?

This year our schedule is filled up to December with touring.  But we do have it planned to record the next album next year. I'm very excited for it.

As a final fun question, are there any metal bands that have any influence on Mono?

I wouldn't say that there's any influence from metal, but I have a lot of respect for Converge and Neurosis. We've obviously never played together but that's a big "I wish" lineup.

Thank you so much for the interview, Taka.