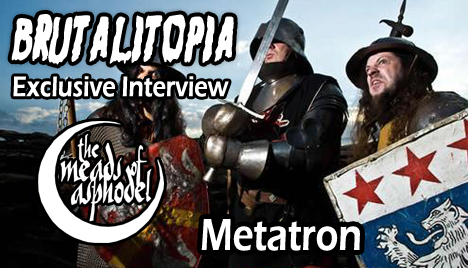 Recent black/avant-garde/you name it metallers The Meads of Asphodel released their split EP (with Tjolgtjar) called Taste The Divine Wrath. It is a solid taste of what both bands can offer as a full-length and also acts (from The Meads) as a place between Sonderkommando and their future releases. I got in contact with the band's leader, Metatron, to talk about the EP, religion, medieval themes and pure fucking hatred. Enjoy more after the jump.

Good day Metatron, what do you find yourself doing on this fine day?

A cold dismal day it is. The British grey clouds and dew misty fields are wrapped with ancient tales of deeds done and battles won. I am writing lyrics today for my other band, Wolves of Avalon, so it is good weather to pen blood blasted conflicts of old.

What was the genesis of The Meads of Asphodel?

This was in 1998, many moons ago when tape trading was the normal thing to do and the internet was but a disease awaiting to strangle the music scene to death. We did 3 demo’s and then got a deal with the UK label Supernal Music. We released 3 albums and a split with Mayhem, and after this signed to Godreah records and then Candlelight Records. During this time we have released in total 5 albums, 3 splits, and various compilations.

You draw heavily from religion, was your upbringing a part of the satire and/or hatred?

I was raised in a world of Christianity, and yet the world around me was of real hatred and cruelty, and the religion a false hope for love and salvation. I find religion to be totally mythological. The Christian, Judaic, Islamic strains of the ancient Semitic sky god worship is no more real than the Gods of the Vikings, Greeks or any other deities of any nation.
Why would anyone wish to kneel before a genocidal sheep herding peoples God??  The whole concept of Christianity is insane, as is the ridiculous Satan figure born from medieval superstition and the great poet Milton. Any decent person should spit on the shit that is Christianity.

These ancient thoughts are best left in the past as they have no valid purpose today apart from to fuel more hatred and misery. I have studied the ancients, the demographic changes of the Earth and the geographical surroundings of religious growth. It is all total nonsense based on ignorance and indoctrination.

The medieval themes mesh with the eastern influences in your music, where did you first come up with the idea?

It is just to grasp the ancient atmospheres and weave them into a modern sound. I think Black Metal can be a good foundation to create any form of sound. Look at Sigh, Arcturus, and all the many experimental bands that have evolved from this primitive form of music. It is such a unique genre.
We have written in the past, about the birth of Christianity and the eventual Holocaust this corrupt institution gave birth to.  To put it in layman’s terms, the Old Roman Empire expelled the Jews from Palestine, the Romans stole the Jewish prophet and his religious ramblings and made him a Christian God, then blamed the Jews for his crucifixion. The Roman Empire became the Holy Church of Rome and the Jews were scattered across Europe. 2000 years later, most countries hated Jews, the church blamed them as God killers, Hitler came along and just stoked an already burning rage, then the Holocaust appeared. But of course we all blame the Germans and the guilt of Rome is rarely spoken off. It is quite insane.
The music reflects the eccentricity and unpredictability of both events.

Taste the Divine Wrath is a solid example of your storytelling, specifically 'Balthasar Gerard' and his gruesome demise, yet you balance that with some more extreme music towards the end of your split. How are you able to balance it so well?

We never have limitations and do what we do our way. I like to create a lyrical concept around actual events, to teach a part of history long forgotten. The Meads have always been about creating music with a very purposeful lyrical soul. The whole embodiment of our music is as good as we can make it to the best of all our abilities.  The new songs here are pretty stable in terms of arrangements and we do not overly drift from the main construction of the songs. Only the cover of, You got the love [Hate], is the curve ball on our part of the split.

How did you come across Tjolgtjar and the idea of doing a split EP with them?

The label, Eternal Death came up with the idea and it was in keeping with our long respect for the underground. It is a place we feel comfortable in and  we like the many formats of Vinyl, splits, tapes and the special purpose of the underground. We are familiar with Tjolgtars music so it was a good choice of band for us.

Are there any plans for a follow up to your last LP, Sonderkommando any time soon?

We are working on a new album as we speak, as yet untitled, but it will explore the many aspects of ethnic cleansing throughout history. The not so well documented ethic cleaning of Palestine by the Jews, and the Native American Indian genocide also.  We will explore the human need to hate and cause ill will to his neighbours for whatever reasons he can find.
J.D Tait has been working on his other band, Ebonillumini  and they have just released an album ‘Arktos, on, Whicker man recordings.
And I am finishing a new Wolves of Avalon, album, Of Corpse Grey….

Just to thank you for your time and interest in the Meads.
I wish you well.