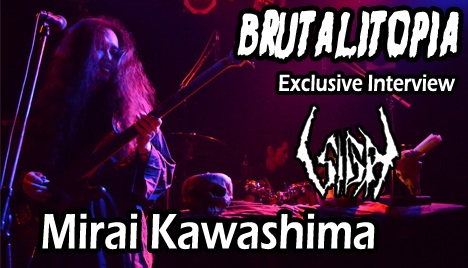 I recently had the distinct pleasure of interviewing the inimitable Mirai Kawashima of Japanaese Avant-garde metal band, Sigh. I asked about their insanely fun new album Graveward, new members to the band and the impact of Japanese metal.

More after the jump.

What was the lyrical impetus for Graveward?

As the title implies, it's about death. To be precise, about our mortality. It's nothing new, typical old stories. Some songs have a story like "Out of the Grave" is about waking up in a coffin buried six feet under, "The Forlorn" is about seeing your own dead body lying in the hospital etc. They all are cheesy stuff. The album is dedicated 70s / 80s horror movies. So are the lyrics.

You recently added You Oshima on guitar, what other elements has he added to the Sigh package?

I can say You Oshima saved Sigh and we saved him too. I almost gave up recording Graveward when I received the completely out of tune guitar files from the old guitarist. I am sure anyone could tell they were horribly out of tune for the first listen, but he said he used the tuning machine properly and heard nothing wrong. So I had to make it visible with Auto-Tune to show him how bad they were. With the guitarist like that, no matter how hard I tried, the album could be easily ruined! So we had to fire him although he was our long time friend. A few years ago he started chasing some pre-adolescent underground idol who has only 10 fans or so, and he was spending all his time and money on them. Obviously he lost his passion in music. So it was lucky for us to meet You Oshima. Even from the first session with him, we felt like we had been together for many years. He was the perfect guitarist for Sigh. You is known for his project named Kadenzza, who released two albums on Holy Records in France. However, after that he had to go through some bad luck. First he had a cancer. Then the nuclear power plant accident came. His house is just 35km way from the plant. So he was almost retired from music. Then he got mail from me asking to join Sigh and decide to come back to the scene. So you know it was a happy encounter for both of us!

You have been releasing a consistent stream of albums since 2005's Gallows Gallery, what keeps the new material from getting stale while also producing more and more material?

It all depends on inputs. Whether be it music or other art, you need inputs to keep outputting. I am still a big music fan and I always try to keep discovering new music. I try to read as many books as possible. I try to watch many movies too. Also I never start making a new album unless I feel 100% confident that the album will be something special. So usually I need time to re-charge myself after an album is out. But this time, I've already started thinking about the new one. We took too long to finish up Graveward so I'm already up to the new ideas.

What were some of your main influences that pushed you in an avant-garde direction?

Definitely horror movie soundtracks. In the 90s I was reading a lot of books on musical theories. However, none of them told me how to write scary songs. Then I noticed that 20th century's classical music was often used in horror movies. Probably the soundtrack to "The Exorcist" is the best example, which has the works by Penderecki, Webern, Henze etc. So we never wanted to be avant-garde or anything. We just wanted to write something scary that reflects the feel which horror movies often carry.

Has your misanthropic stance on the world changed in the past few years?

Well, I wouldn't call myself misanthropic. I just like people I like and I hate people I hate and the latter happened to exist much more than the former...

Are there any plans to tour or make an appearance in the US?

Unfortunately not. We'll play two shows in Europe this summer. A few shows will be done in Japan, but we have no plan for the US dates right now. Now Dr. Mikannibal has a baby and we have to slow down a little bit.

What are you guys listening to recently?

Now I am 45 years old and I am not sure how much more of new music I can hear in the rest of my life, so these days I try to listen to something I am not familiar with rather than the favorite albums I've been listening many times. Some of the artists I've been listening to right now are Albert Marcoeur, Francois Tusque, Michel Doneda, Catalogue, Last Exit, Skeleton Crew, James Blood Ulmer, Ronald Shannon Jackson etc. Lots of obscure free jazz influenced stuff.

Are there any Japanese artists that fans of yours should get more familiar with?

You should check out Cohor. They're really cool. Their new album will be out on Osmose Records some time this year, so it won't be difficult for you guys to give them a try.

Is there anything else you would like to add?

Thank you very much for the interview. For the latest info on us, visit our Facebook page and Twitter.