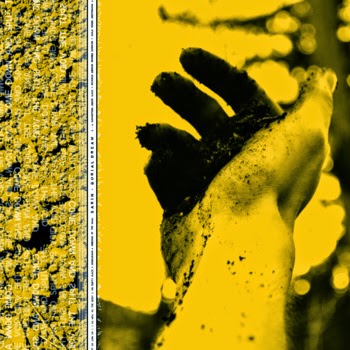 It seems crazy to think about, but 2015 marks five years since Isis called it quits, leaving the metal world without one of its most important and influential bands.  Just as crazy to think about is that post-metal as a genre is doing at least as well now as it was when the world lost Isis.  Part of that is due to the members of the band pursuing other projects with the same insane level of talent they brought to Isis; another is a new wave of post-metal bands following in Isis' wake.  Pelican continues to defy expectations and improve on every album they release, and I've written before about my love for Cold Blue Mountain and their phenomenal 2014 album Old Blood.  Now another disciple has stepped forward to spread the good word, in the form of Brampton, Ontario's Sarin, and their new album Burial Dream.

Sarin is made up primarily of David Wilson and Aleks Hara; Hara plays the drums and Wilson does everything else.  According to Wilson, the band performs live as a four piece, using "anyone who's willing to lend a hand," which is a pretty cool methodology for a band to have.  They've been around since 2012, and some preliminary Bandcamp research showed that Burial Dream is their second album.  So now that you know a little about them, let's jump into the nitty-gritty.

Burial Dream has everything you could want from a post-metal album: long, flowing instrumental passages, vocals that erupt volcanically seemingly out of the blue, and enough emotional weight and catharsis to give even the most hardened, jaded of listeners a case of the feels.  Timing is crucial for this kind of music, as too long on a certain passage can allow listeners to zone out, and not enough can prevent them from getting actively involved; Sarin's timing is impeccable, as evidenced by the mid-section of "Monograph."  The section starts off quietly, with just a guitar line, before bass, another guitar line, and drums come in and build the section more and more, before everything but the guitars drop out, and then the heavy stuff comes back.  Building, layered musical passages like that are the bedrock of post-metal, and Sarin does them as well as anyone.

Burial Dream also follows an odd-even pattern throughout its seven songs; the odd tracks are the most "song-like," stretching out between six and eight minutes and moving between movements and sections, while the even tracks are more interlude-ish, more drone/noise metal than the others.  I didn't mind this split, as each song flowed into each other pretty well, and as the album is a pretty brisk 37 minutes, it's quite easy to digest in one listen.  Album opener "As Well as the Body" has a definitely Panopticon-era Isis feel to it, at least until you get a few minutes in and realize it went somewhere completely different than you had anticipated.  "-" is a track that alternates between sparse guitar parts and distorted, pummeling riffs frequently, and to great effect.  There's less build on "-" than anywhere else on the album; the parts fit together exquisitely, but it's still incredibly jarring when they switch, and the result is an uneasy, discordant slice of sludgy goodness.  Vocalist Angela Deveros lends her talents to the final two tracks, "Apparitions Under Glass" and "Reverse Mirror," which (aybe not so) coincidentally happen to be my favorite songs on the album.  "Apparitions Under Glass" buries a haunting melody under Pelican-levels of feedback, and "Reverse Mirror" is a driving death march of a dirge, surging relentlessly forward slowly enough for you to feel every crash of Hara's cymbals.  The dichotomy between Wilson's screams and Deveros' ethereal singing heightens the emotional resonance, and once again, the band's timing out of the song and its "pieces" is absolutely stellar.

At the end of the day, whether or not you enjoy Burial Dream most likely depends on your feelings toward post-metal in general.  Sarin doesn't really break any new ground on Burial Dream, but if you're a fan of the genre, you won't be disappointed in what they bring to the table.  Burial Dream is a very, very solid album that showcases a band completely comfortable with their sound, and one that deserves to be heard and experienced.  I'll be the first to admit than any conversation about post-metal begins and ends with Isis, but if Burial Dream and CBM's Old Blood are any indication, the proverbial torch of the genre is in very good hands.

Burial Dream is out now; check it out below and head over the band's Bandcamp page to pick up a copy of the album for yourself!