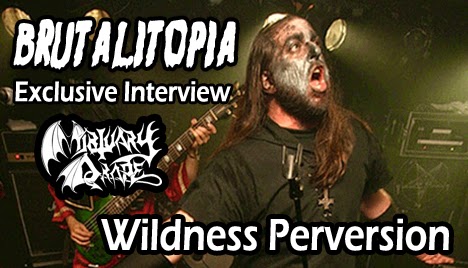 Mortuary Drape are one of Italy's finest metal exports and a band that is about as obscure and revered as it gets from the Mediterranean. Their occult black metal has garnered them much fanfare in the past and their first album in 10 years; Spiritual Independence, seeks out to tell fans of old that they haven't changed one bit. This old school outfit operates by many ideals that have existed since tape-trading, like getting local fan support and even handling their own mail orders across the world. So what has this revival been like? I asked founding member and vocalist Wildness Perversion for his take.

To start things off it has been a busy time for you guys, Maryland Deathfest a few years ago, first album in 10 years. What was your major impetus for the creation of Spiritual Independence?
We had a lot of gigs during the last years, tours and festivals, the most important creative part of this last work was the time. We wrote some parts right after the Buried in Time's release and then during other periods we cut, arranged and refined every song. From 2010 When the actual members came, we started to build a creative musical path that brought us to the conclusion of this long and hard work.

What is the Italian heavy metal scene like?
The Italian scene offers a lot of good and high level bands. The main problem is to emerge: a lot of bands pay to play because they hope to have more chances and promoters take advantage of this, or they give the master for free to the label and the result is less money for the band and big money for the label.

Are there any other bands from the Boot shaped peninsula, that we American listeners should be paying attention to?
Yes Of course, there's a lot of good bands but they are underrated. I don't want to make a list of names, I just want to say a thing: the Italian crowd must be the first to support their bands, we must believe in them. We are good to fill up clubs during foreign bands concerts even if they are nothing special.

What kinds of bands left their mark on your playing style? What was it about them they attracted you to their style of music?
We appreciate old school metal as Mercyful Fate, Slayer, Celtic Frost, Bathory, but also less famous bands into dark prog metal, or bands like Goblin. Even if we appreciate all these bands we always tried to get our own personal sound... Some people say we did it and it is a big compliment.
Where did the inspiration for your classic winged logo come from? Our first logo was completely different. Then during the 90's we received some sketches from a friend and at the end we chose the one that everyone knows, it was perfect. Thanks to this eternal artist, ciao Roberto.

What is the reason you choose to play in robes and obscure your identities?
Every Mortuary Drape line-up was formed by different characters with a personal image and particular nicknames. We made this choice as far back '86. We wanted to build an image of unity, so obscure identities and nicknames was the right way to reflect the music and interests of the band; a connection between music, image and lyrics. With this line-up we decided to change the image, wearing a common robe and use only the name and surname's initials of every member. We avoided new nicknames to avoid repetition and predictable names, that's all.

Is it refreshing to come up with new material? Was it something you might describe as cathartic?
Cathartic is not right, it was a mystic and occult experience. Sometimes a song rises from a guitar riff, sometimes it comes from a lyric that inspires the music. Everybody gave his contribution and it was very important to the final product to make it sound 100% Mortuary Drape.

Will the United States be hearing from the band on any tours in the near future?
Until now the only confirmed gig is the Inferno Festival in Oslo where we are going to play with Behemoth, My Dying Bride, and Enslaved. Furthermore we are working on a European tour and some gig in there in USA and South America. We hope to define and schedule it during the next months.

Is there anything else that you would like to say to the Brutalitopia readers?
I say thank you for the space on your pages, take a look to our wesite www.mortuary13drape.com or our Facebook page to get some news! Search always your... Spiritual Independence... See you in Hell!