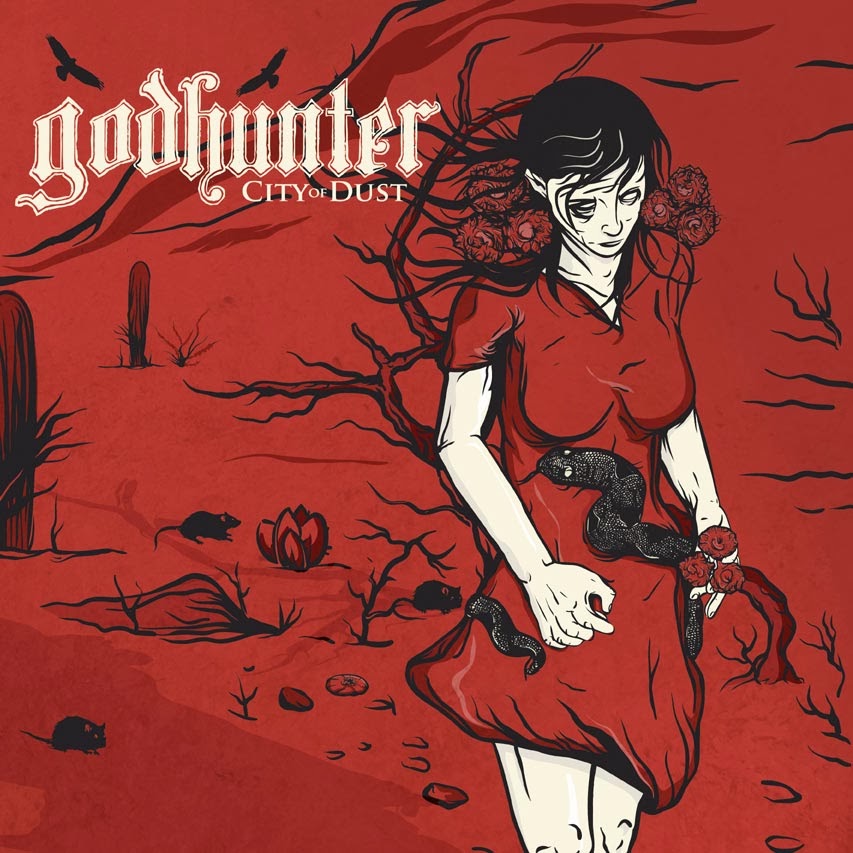 "We live now in a nation where doctors destroy health, lawyers destroy justice, universities destroy knowledge, government destroys freedom, press destroys information, religion destroys morals, and our banks destroy the economy."  This is the soundbite that opens City of Dust, the second full-length album from Arizona's Godhunter.  Before the band plays a single note, they let you know this is going to be a heavy album topically; when the distorted, fuzzed-out riff kicks in immediately after the audio sample, they show you it's going to be a heavy album period.

If you pay attention to any US Political News, it should come as little surprise that Arizona (along with other states, to be fair) has been making waves the last few years through a series of ultra-conservative legislation, all of which follows a pattern of discrimination.  Quite a few people are upset about this, and it's fair to say the ranks of the angry include the members of Godhunter.  I don't typically focus on the lyrics when I listen to music, because I find that they're often repetitive (Behemoth hates Jesus; who knew?!?!) or nonensical ("I blow my load over the status quo..." wtf Josh Homme?), or simply there to go over the music.  In Godhunter's case, the lyrics to City of Dust are as integral to the listening experience as each of the many stupendous riffs, and lead vocalist Charlie Touseull manages to convey the frustration, anger, and resentment of every word.  His vocals across the album are great, but his bellows of "SNAKE OYELLLLL" in " "Snake Oil Dealer" are easily my favorite.

Said riffs are courtesy of guitarists David Rodgers and Jake Brazelton, and they absolutely fucking OWN.  Alternating between a sludgey drone and a more upbeat, Clutch-like pace, Rodgers and Brazelton team up to create some of the best pure riffage I've heard in a long time.  From the hypnotic, cyclical beginning of album opener "Despite All," to the perfectly-tempoed "Snake Oil Dealer," the duo brings the goods.  But nothing tops the sheer awesomness of "Brushfire," a song with an opening riff that bring to mind emergency or air raid sirens before barreling along like its titular namesake, consuming everything in its path.  And when the riff finally slows, the rhythm section of Dick Williamson's bass and Andy Kratzenberg's drums kick in and take it from there.  Williamson's bass lines are just as hypnotic and frenzied as his guitarists riffs, and Kratzenberg crashes the cymbals for all their worth, creating an absolutely devastating effect.  "Brushfire" is far and away the best song on the album musically, a dynamic six minutes you wish would last three times that long.  Make no mistake though; while "Brushfire" is the musical apex of the album, Rodgers, Brazelton, Williamson, Kratzenberg, and Matthew Davis (who handles cello, keyboards, and effects) absolutely destroy it across the entirey of the record.

Unlike many other riff-oriented stoner/doom albums, City of Dust never falls into the trap of feeling repetitive or dull.  There are four or five sound samples scattered throughout the album; most feature spoken words on the political state of Arizona, but one features coyotes howling over what sounds like a crackling campfire.  Additionally, "Shooting Down the Sun" is the tails to the rest of City of Dust's heads, Touseull's howling rage traded guest vocalist Carlos Arzate's anguished lament; Rodgers' and Brazelton's crushing riffs traded for a single acoustic guitar.  "Shooting Down the Sun" is probably more memorable than it should be due to its radical departure from the rest of the album, but it never feels like a gimmick, as though the band decided to throw in a quasi-ballad just for the hell of it.

Mixing metal and politics is a tradition that goes all the way back to the origin of the genre, and City of Dust is a worthy entry in the list.  Apart from playing damn good music with incredible riffs and writing easily accessible, frightening lyrics about the state of the political system, Godhunter comes across as legitimately pissed about the topics they discuss, genuinely reacting to the atrocities they see happening in their native Arizona with rage and sorrow.  City of God is an instant stoner classic based on riffs alone (once again,  "Brushfires!!!!"), but the inclusion of politically poignant lyrics and a variation of emotional reactions pushes it over the top.  This is an album that has something to say from a band that isn't afraid to say it, an album that invites you to headbang while inspiring you to write your congressman and demand changes. Listen to it below, and then head over to Bandcamp and give this band your money.

-Durf
Posted by Brutalitopia at 8:00 AM