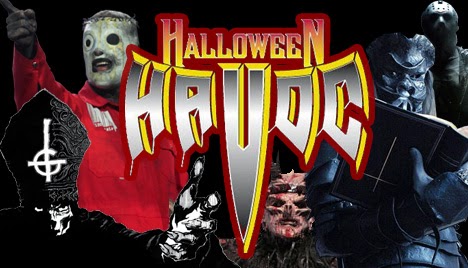 Happy Halloween week boos and ghouls!  Durf here with my own personal spooktacular five song list, perfect for celebrating the second most metal of holidays (you will never convince me that anything is more metal than Thanksgiving; millions of people sacrifice a turkey to the ravenous god of gluttony).  I definitely advise you to go check out Mick's very solid list as well; between the both of us, you've got some fantastic songs to use as a soundtrack to your trick or treating, bestial sacrifice to most unholy Beelzebub, or your necrophiliac tendencies... however you're celebrating, these songs will help you do it right.

This song is the outlier among every song the wonderfully misanthropic Dragged into Sunlight has put out; where the whole of their debut Hatred for Mankind and "Part II" and "Part III" from their incredible follow up Widowmaker are scorching, hateful songs that revel in the abomination of mankind, "Part 1" is a quiet, dread-inspiring atmospheric wonder.  The song clocks in around thirteen minutes, and every second of that time is used in building tension and creating a suffocatingly terrifying ambiance through a scattered use of strings and piano.  The vocal sample referencing killing humans at the end of the song brings the dread to a head before "Part II" kicks things off with a bang.  Oddly enough, a YouTube search for this track turned up nothing, so go listen to it here.

Doom metal presents a lot of great choices for creepy, atmospheric Halloween tunes; honestly, that's kind of the point of the genre.  But Bell Witch's debut album Longing stands head and shoulders above most of the genre, creating a mood that is absolutely soaked in uncertainty, fear, and dread.  From that album, "Beneath the Mask" makes the most sense as a Halloween song for it's reference to and vocal sample from Poe's "The Masque of the Red Death," a story about Death arriving as a guest to a special ball in the form of a deadly illness.  It's one of the better musical adaptations of a great literary work, as it captures the slow realization of impending death that Prospero experiences in the story.  Play this one at your Halloween party; a party don't start poppin' until people start thinking that one of the guests could be Death come for them.

Another doom band that knocked it out of the park with their debut (Sorrow and Extinction), Pallbearer earns their spot on this list with the album's closing track.  Starting off slow and closing with a sense of being enclosed in a coffin, "Given to the Grave" is a song that makes you stare death in the face and realize that it's coming and there is nothing you can do to stop it.  Unlike "Beneath the Mask," in which Death has arrived and there's no time to think, "Given to the Grave" presents death as an inevitability of unknown time or place.  If you'll excuse me, I need to go turn on every light in my house.

WHAT?!?  With the litany of black metal bands out there that I've ignored, I'm using the last spot on my list for a guy more known for progressive rock than evil, growly music?  You're goddamned right I am.  Listen to this song.  Listen to the creepy keyboards that open it up, listen to the lyrics about a creepy loaner who wants to collect people.  That's some serious Buffalo Bill shit, and the fact that it's hidden in Wilson's beautifully quiet Grace for Drowning only serves as a reminder that anyone can be a demented serial killer.  There ain't much scarier than that.