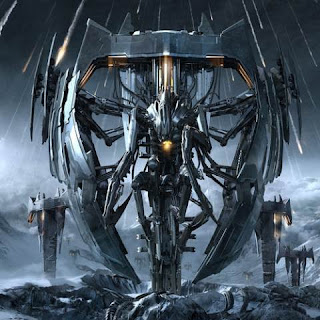 There’s a fine line in determining whether the changes in a band’s sound over the course of their career are indicative of actual positive growth. Sounding different then what you became known for does not automatically equate to quality. Yet, on the flip side, it doesn’t automatically disqualify it from having some merit either. In the case of Trivium’s sixth full-length album, Vengeance Falls, the latter is supported and then some. While they take a definitive direction with the more mainstream side of Matt Heafy’s vocals, Vengeance Falls manages to also encapsulate the kind of heaviness you would hope for, and not to mention some of their strongest songwriting since Shogun.

Perhaps the greatest triumph of Vengeance Falls is the easy, yet heavy fluidity throughout. With each track using their own unique variances of thrashy rhythms, harmonized riffs, blasting breakdowns, and huge powerful chorus hooks, the album never suffers from having a “low point” and never comes across as repetitive at any point. You can get a gist of the album from its opening track, “Brave This Storm,” as it delivers a head-bob prone opening rhythm, one of the album's many super catchy choruses, an explosive breakdown, and blistering solos. In terms of technicality, Vengance Falls' solos and appeasing riffs are matched only to that of Shogun, and arguably, Ascendancy. It’s certainly refreshing to hear Trivium keep their technical chops intact and use them to create some of their most engaging material to date.

The vocal performance is another layer of note that helps masterfully craft Vengeance Falls. While I was keeping all my fingers and toes crossed for another brutal track like “Dusk Dismantled,” Matt Heafy’s vocal performance on this album is another example of how you don’t need harsh vocals 100% of the time to create music that has an audible weight to it. If anything, Heafy’s harsher vocals, when used sparingly, make them seem heavier when they actually are unleashed. Good examples of this come in the form of tracks, and personal favorites of mine, “No Way To Heal” and “Through Blood and Dirt and Bone.” These harsher vocals serve as anticipated boosts to the song by breaking up the major hook-laden melodies. Even when it comes to the cleaner melodies, Heafy’s delivery has never sounded as confident; considering that the choruses absolutely soar on tracks like “Strife” and “Villainy Thrives”. It’s these kinds of catchy tunes that you don’t feel guilty about having stuck in your head.

For anyone who’s done some research on Vengeance Falls prior to reading this review, you’re probably in shock that I’ve managed to go this long without mentioning the elephant in the room that happens to sport two large chin piercings…..former Disturbed frontman David Draiman, the album’s producer. When first announced that Draiman would be taking the production reigns, it certainly raised some eyebrows and understandable levels of skepticism. Naturally, when the first tracks were released off the album, ("Brave This Storm" and "Strife") there were waves upon waves of asinine comments about Heafy sounding just like Draiman. To much surprise, though, the end product results with Matt Heafy sounding, like I mentioned before, the most confident he ever has and the most defined.

Vengeance Falls may not be as blatantly heavy as Shogun, but it makes up for it with some of the band’s most poised songwriting on an overall album yet. "Mainstream" is a certainly a term with a connotation that's more or less frowned upon in the music world in general. However, if more radio music adjusts to the tune of albums like Vengeance Falls we should all breathe a sigh of relief. Trivium's sixth album is truly a coming of age album and clearly demonstrates the band's maturation. Even if you're not necessarily a fan of Trivium, I would still highly recommend this to anyone.

- Mick
Posted by Brutalitopia at 8:08 AM