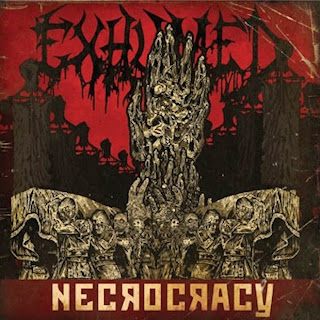 Gory veterans of the heavy metal scene Exhumed have just bestowed upon the metal masses a new album; one that follows up their critical success of a previous album, namely All Guts No Glory, an album I myself gave the #22 spot in 2011. So it is needless to say that expectations for Necrocracy are quite high. Matt Harvey has returned with his merry band of medical malpractitioners and has used the previous 2 years to up the ante and make an album that is equally heavy and catchy and helps open doors like a coroner who loves his job.

The album begins to the tune of "Coins Upon The Eyes," an aggressive opening salvo; one that helps to prepare the listener for the power that follows. Rob Babcock's drums nearly explode on "The Shape Of Deaths To Come" and the vocals from Harvey and Bud Burke remind listeners of the Bill Steer and Jeff Walker tandem on Necroticism, as well as some riffs that meet somewhere between that album and Heartwork. The songs finishes with a flourish as dual lead solos polish off what might be the album's strongest track and one that shows that this melodic death metal band has got quite a bit of melody to support their death.

The album's title track provides a ample time for breakneck drumming and the literal breaking of one's neck due to the sheer catchiness of the percussion work. "Dysmorphic" is a straight forward slaughter from start to finish as the band rarely relents from the muscular pace. The band clearly learned from progenitors of dual leads and fans of death metal and Judas Priest would be hard pressed to miss out on this song.
"(So Passes) The Glory Of Death" provides a great sound that jumps right out of 1994. More solos show off ample skill and songwriting that were seemingly absent on the latest release by Revocation; songwriting in this genre can be a lost art, but not for Exhumed.

Exhumed have managed to not only meet expectations for Necrocracy but also in some ways surpass them. I do enjoy dingy and muddy death metal and when it comes to goregrind it takes a bit of an ode to the masters as well as adding your own personal touch to make for a memorable album. Exhumed has done just that and created an album that will go hand in hand with the year's best. For a bloody good time, don't forget these Bay Area bludgeoners.

-Tom
Posted by Brutalitopia at 8:08 AM