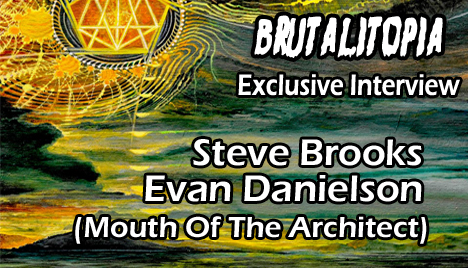 This past Sunday, here in Chicago, I wasn't quite as captivated with the train-wreck that was the MTV VMA's as much as the rest of the country seemed to be. I was much more interested in the fact that Ohio metallers Mouth Of The Architect were playing a headline show in a super tiny bar venue for a mere $5. In addition, I was able to catch up and interview their guitarist/vocalist Steve Brooks and their bassist Evan Danielosn. We managed to chat about their touring they just wrapped up, future plans, thoughts on the new album, and plenty of other topics worth hearing about.

Check out the interview and some awesome footage of the concert after the break!

- Mick
Posted by Brutalitopia at 8:03 AM