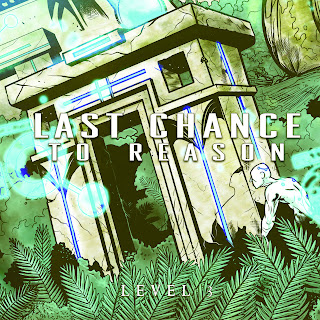 One of the pillars of the video game design cannon is pacing. The further the player advances in the game, the more difficult the challenges become which, in turn, results in bigger and bigger rewards for completion of those tasks. However, in order for the player to progress through the game, a base understanding of the game’s mechanics needs to be clearly conveyed to that player. Usually, this basic training is given to the player through the first level. Once this base knowledge is assumed, each level thereafter begins to reveal the true ethos of the game. In respect to progressive metal act Last Chance To Reason, their latest album, Level 3, acts as one of those revelatory levels that creates a much fuller vision of the band’s capabilities. While the overall sound of the band from past releases has always leaned towards straight-line metal to me, there are plenty of progressive spins and vocal variances that shine in Level 3, making it an extremely worthwhile listening experience and surely the band’s best to date.

Perhaps Level 3’s greatest triumph is that while there are certainly progressive elements at work, the album never beats you over the head with them and says “listen to how progressive this is! Isn’t this great because it’s so progressive?!” Rather, Level 3 provides a much more cohesive mix. Tracks like “A Glimpse of Omniscience” and “The Dictator” bring the vibrancy of hard-hitting, yet catchy metal riffs while other tracks, such as “Cosmos – The Pattern Forms” and “Adrift II – A Vision Ends,” provide the more video-gamey, synth soundscapes and sweeping guitar solos to create a refreshing counterbalance. Most of the other tracks maintain this balance within themselves to ensure no particular sound goes unbalanced by another.

The vocals are also a thing to take note of on Level 3. Michael Lessard’s performance is nothing short of impressive. His vocal styling is dominated by clean passages that sometimes border on ethereal, but provide charming melodies all the same. Screams are also utilized during heavier bits to truly convey that the vocals and music are in unison. While I do appreciate Lessard’s attempts to mix it up in terms of clean and harsh vocals, I’ll say I’ve never been huge on his screams. It’s not that they’re bad per se, but they just don’t compare to how powerful his clean vocals can be, and as a result, they read a little weak.

There isn’t really much that I can criticize Level 3 for, at least on any major level. Aside from my comment on Lessard’s screams, the only other real beef I would have with the album is that there aren’t any other songs that pop like “The Escapist” does. Although, perhaps if the other songs did, they’d have to sacrifice some of the ambient risks they took.  However, that could just be unrealistic of me to wish something was perfect when I’m presented with something that’s great. While I’ll reiterate that this album isn’t perfect, this is definitely an album you would describe to your friends as “solid.”

Despite having gone through some heavy line-up changes, Last Chance To Reason’s sound has undoubtedly matured and reached its highest point thus far with Level 3. Their previous album, Level 2, admittedly wasn’t something I was particularly blown away by. In the grand scheme of things though, Level 2 was a necessary stepping stone to Level 3. If this was the equivalent of the third level of an actual video game, I’d have to say I’m sticking it out for the levels to come.


Check out the rest of Level 3 on the band's bandcamp page.

Posted by Brutalitopia at 8:19 AM