Denmark is a country with a strong heavy metal past, whether you know about it or not. From Mercyful Fate to Artillery there have been great albums out of the country and sadly not enough people have thought to seek out this country's history; luckily Hells Headbangers did just that by reviving Witch Cross and their debut album Fit For Fight from 1984. The album which was re-issued last year and was reviewed by myself here; I have now had even more time to digest the album since it's release and I plan on bestowing that love here on this week's edition of Fear Of Tomorrow. 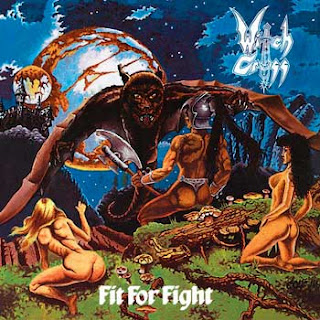 Soak in that incredibly cheesy album art for a moment and remember that this album came out the same year as Powerslave, Don't Break The Oath, and Ride The Lightning so it would not be a surprise as to why this album isn't very well known. With the same buzz of a Hank Shermann the guitars rip through tracks, "Flight Night In Tokyo" and especially barn burner "Rocking The Night Away".

Contained within this wonderful track are soaring guitars a delightfully Mercyful Fate buzz and classic heavy metal vocals. The production quality of the early '80s could hurt a band or it could majorly benefit it. With this album it is certainly the latter as this is not meant to sound like a well oiled machine. It needs to show the ferocity of their country's predecessors and does so masterfully. For anyone who has looked for a classic heavy metal sound that needs a bit more bite, they'd be hard pressed to find many songs like this one.

Directly following the aforementioned track is "Killer Dogs" a song that showcases the band moving at a paced crawl with plenty of riffs thrown in to the mix with hard and heavy breaks leading up to a guitar solo. The connections between the guitar duo of Michael Denner and Hank Shermann is hard to miss especially for fans of Don't Break The Oath and Melissa should not be a surprise as this album as well as those two share the same recording studio of Easy Sound Recording in Copenhagen; the bands may be a bit different but the foundation is similar in the best way possible.

"Fight the Fire" draws more comparisons to melodic thrashers Artillery as the riff sections are beautiful and complex at the same time and clearly seem to be a trait of this country's metallic tradition. The darkest of the songs on the album might just be "Light Of A Torch" the production keeps the album sounding evil and the guitars add the element of melody as this band could most definitely compete with some of the best dual lead guitarists of any time. A forgotten gem of an album that should be appreciated by more people and readily available for consumption at your local record store. 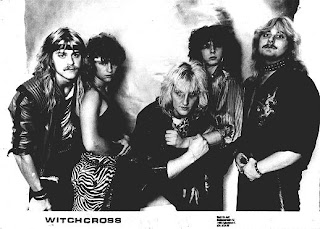 It just so happens that Witch Cross are back together and have recorded a brand new album and only the band's 2nd ever, titled Axe To Grind out for release July 9th here in the States. The band has changed quite a bit to almost a bit of a power metal band with a classic heavy metal heart and seems like a general progression for a band from that era. I leave you with a new track from the band as well as two Danish classics, until next time.