Review: Swallow the Sun - "Emerald Forest and the Blackbird"

My journey as a fan of Finland's Swallow the Sun is an interesting one; I've only recently (within the last year and a half or so) become familiar with the band, yet it just happened by chance that I discovered their albums in the chronological order they were released. I was hooked after my first listen to their stunning debut The Morning Never Came; their heavy yet melodic and melancholic death/doom metal hybrid made a great soundtrack to travelling the snowy streets of Chicago in the winter. It was doom metal without being completely depressing, more stare into the distance lost in thought than curl up into the fetal position and cry, with moments of unexpected and welcome heaviness. I enjoyed listening to their following three albums as well, so it was a pleasant surprise when I stumbled upon this a few weeks ago. Anticipation for the first "new" album after discovering a band is always an enjoyable experience, so I began anxiously twiddling my thumbs and re-listening to Swallow the Sun's discography in anticipation for Emerald Forest and the Blackbird.

Think happy thoughts, and keep reading after the jump...

Emerald Forest and the Blackbird is a turning point for Swallow the Sun.  A magnificent, stunning, utterly depressing turning point in the band's sound, songwriting process, maybe even their very approach to the genre.  It's not a Crack the Skye-sized turn (and it's not quite this drastic), but it is definitely a change of pace from the albums that preceded it.  The heavy moments are still there, thunderous as ever, but the quiet moments are quieter, with slow, nearly ambient wails of guitar mixed with finger-plucked acoustic notes, and even a piano in some places.  Singer Mikko Kotamaki has always had a strong singing voice to complement his harsh vocals, but for the first time, the music is composed to fit that singing voice, and the album as a whole benefits from that tremendously.  From a purely composition standpoint, I was reminded a lot of Agalloch's The Mantle; heavier, "metal" moments and harsh vocals intertwining with beautiful, almost ethereal passages accompanied by clean vocals, united under the common theme of the album.  Nothing feels out of place, and the transitions are executed flawlessly.

The theme of the album is where I felt the most drastic change for the band.  With Emerald Forest, Swallow the Sun have dived headfirst into the doom metal genre, as the entire album is permeated with a deep, dense sadness.  Sometimes this grief is brought to the forefront, completely enveloping the music and the listener, and other times it is left to the background as an underlying feature, but it is always there, ready to remind you that this is an album of sorrow, the tale of a man reading the final pages of a fairy tale to his dying son.  Generally lyrics don't matter much to me when listening to an album, but here they are imperative, as from the opening line of "My child, I will bury you on the highest hill" to the final "goodbye," the music and lyrics combine to create as real a sense of mourning as I've ever felt in an album.  It's easy for music to skim the surface of emotions, but it takes something powerful to get under your skin and into your head, to make you actually feel the grief instead of just commenting "Oh, what a sad song."  While this album can be enjoyed on your commute or as background noise, I can't recommend sitting down and giving it your full attention highly enough (with the lyrics in front of you if you can't decipher Kotamaki's growls).  It won't be a happy listen, but not all art is supposed to be happy.

I definitely recommend listening to Emerald Forest and the Blackbird from start to finish, as it's an album as opposed to a collection of songs, but there are a few standout tracks.  The opening title track is chilling with its spoken-word intro over a lush melancholic soundscape and hushed background vocals, and lead single "Cathedral Walls" uses Anette Olzon the same way Nightwish did, but the restraint and minimalism is far more effective here.  But the highlight of the album may be "April 14," with it's pounding bass drum providing the sound for sometimes whispered lyrics about "the last steps of the frost giants as they leave" and ascending and descending guitar notes.  If you're not sure you want to devote 70 minutes to an album that could give you the weepies, check these three tracks out; if you like them, you'll be able to handle the album from beginning to end no problem.

Emerald Forest and the Blackbird is not an album to be missed; it hits every mark it aims for.  Much like Alcest, or the tales of the Brothers Grimm, or the films of Guillermo del Toro, Swallow the Sun has created a wholly engrossing atmosphere and style within their medium, in this case a world in which the pain and sadness of death is eased by the beauty of love and imagination, a world where it's still possible to become lost in a fairy tale.  Emerald Forest is an album of breathtaking beauty and devastating heartbreak, easily the most challenging album Swallow the Sun have yet to put out.  Without completely deviating from their style, the band has changed just enough to elevate themselves over their past work and into the Realm of the Metal Gods as a melodic doom metal titan, isolated in a bastion of gloom that holds bountiful rewards for any listener brave enough to venture into the desolation and listen.  I'm having a hard time not getting caught up in what this might mean for future Swallow the Sun albums and just revel in the fact that Emerald Forest and the Blackbird is a special album, the kind that doesn't come along all the time (even last year), and is destined to go down as a classic of its genre. 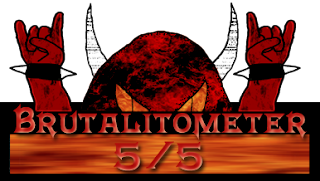 -Durfee
Posted by Brutalitopia at 11:18 AM