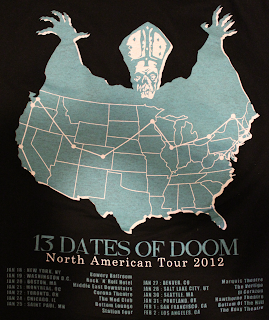 Full disclosure:  I have wanted to see Ghost live since I first listened to their debut Opus Eponymous last February.  I thought I would get that chance when it was announced they were touring with Alcest and Enslaved; unfortunately they had to drop off that tour due to visa issues.  I still went, seeing as Alcest is incredible and Enslaved is, you know, Enslaved.  I enjoyed the show for the most part, but still found myself disappointed I didn't get to see the spectacle that is Ghost.  So you can imagine my excitement when Mick informed me that Ghost was returning to the States, for sure, no visa issues, for another tour.  That tour hit the Bottom Lounge here in Chicago this past Tuesday, so Mick, my roommate Zack and I ventured forth to celebrate a Black Mass with the Nameless Ghouls in Ghost.
Find out if they lived up to my anticipation after the jump...
I'll start off by saying that not only was the Bottom Lounge the most full I've ever seen it (the show was sold out), but the crowd was also the most eclectic I've ever witnessed at a metal show; absolutely everyone seemed to fit, which is one of my favorite things about Ghost.  As the guitar tech got the instruments ready, a smoke machine began pumping out billowing clouds of fog.  Finally, the lights went down, and a roar erupted from the crowd.  The stage lights came up slowly, and onto a fog- and pot-smoke enshrouded stage marched the ghouls.  Clad all in black, with masks obscuring their faces, the band picked up their instruments and began to play an instrumental introduction.  Only then did the Nameless Ghoul emerge onto the stage.  Dressed in his standard unholy pontiff's robes with a corpse paint mask and vicar's hat, the Ghoul strode to the front of the stage and acknowledged the crowd.  The bassist began a familiar bass riff, soon joined by the drummer, guitarist, and keyboardist, until with a falsetto cry of "Luciifeeeeeeeer!" the band launched into "Con Clavi Con Dio."
From there, it was a non-stop barrage of all the songs from Opus Eponymous, played out of order to keep a mysterious sense of "What comes next?" in a set that contains all the songs the band has yet to compose.  All of the songs were tight musically, and while the Nameless Ghoul seemed to struggle with his falsetto toward the beginning of the show, by the time they got to "Stand by Him" four songs in, he was in full swing.  The theatricality of Ghost was also on full display, as beyond the costumes, the Ghoul interacted with the crowd, responding to their repeated shouts of "Satan!" with gestures typically reserved for a pope, as though he was leading a worship service for the damned.  And it definitely seemed like a worship service, as the majority of the crowd sang along, surprising me; I had no idea Ghost had become this popular, even within the metal community.  In addition to the tracks from Opus, Ghost performed their cover of The Beatles' "Here Comes the Sun," one of the rare covers I genuinely enjoy and prefer to the original, before wrapping up their set with "Ritual."  It was only when the Nameless Ghoul addressed the crowd before "Ritual" that most of the people in attendance realized they were playing a ghoul down; one of their guitarists had gotten sick during their first song, left the stage, and hadn't returned.  Perhaps the biggest compliment I can give the band is that even though I saw the guitarist leave, it was soon put out of my head as the rest of the band carried on without any of the songs suffering.
I left the show more convinced than ever that the Satanic angle of Ghost is an act rather than their actual beliefs, but it's a fun act if you don't take it too seriously and just enjoy their catchy, riff-heavy spin on classic metal.  I do wonder what's going to come of the band in the future; whether they will continue to evolve as musicians making great albums while maintaining their satanic pope motif, or whether they will devolve into self-parody a la GWAR, but that question can be answered another day.  For now, I'm going to revel in the fact that this was one of the most fun concerts I have attended.  Yes, their set was only about 40 minutes, but they packed so much into that 40 minutes that I didn't feel cheated for a second.  Ghost has a handful of stops left on their 13 Dates of Doom Tour; if one of them is anywhere near you, I cannot recommend strongly enough that you make it out to see them (and maybe get there early to catch Blood Ceremony, who was a lot of fun as well).  Ghost is only going to become more popular, and then you are going to kick yourself that you missed them in the intimate venues they are currently headlining.
- Mic
Posted by Brutalitopia at 12:41 PM