It wasn't until late last year with releases from Agalloch and Alcest that atmospheric black metal truly resonated with me.  Around that same time I stumbled upon the 2009 release of White Tomb from a certain unknown, at least they were to me at the time, Irish black metal band called Altar Of Plagues.  My random intrigue in the band sure payed off.  White Tomb was dark and powerful enough that when I heard Altar Of Plagues would be releasing a new album this year, I got super excited.  That album, Mammal, is finally here.  And with its impressive minimalistic approach to creating a soundscape that is vicious, primal, and downright entrancing, it'll surely be one of the more profound releases you'll hear this year.

By creating brutal droning beats and mixing them with long atmospheric interludes, the overall tone for the album is set with its opening track, Neptune Is Dead.  The opening minute and a half will give you a pretty good idea of the sheer epicness that the album, as a whole, will present to you.  Let's also not forget to mention that the main riff in this opening is nasty.  With the intro slowly fading into it, the riff kicks in at 1:35 and proceeds to make you feel like you're being bludgeoned in both the ears and face simultaneously.  That riff along with the backing of brutal blasting drums gives off what can only be described as raw emotion and power.  It's this kind of aggressiveness that gives the music on Mammal a very unrelenting and in-your-face edge.

The next two tracks, Feather and Bone and When The Sun Drowns In The Ocean, are certainly mellower in comparison to the opener.  However, that isn't to say that they are any less important (or any less eerie sounding for that matter).  These tracks are the center pieces that tie together the album and almost act as a bridge that assure your completed journey of an epic listening experience.  Feather and Bone initially builds off of the agression that was established by its preceeding track by further using blasting drum beats and a devastating guitar section, but it eventually takes a much more relaxed and eerie tone, overall.  It's with this track that it begins to become clear how effective their minimalist approach to creating very primal and ancient sounds is.  It establishes a sense of history and makes you feel like your listening to sounds of an ancient time, long since forgotten.

On we transition into easily the most eerie of all the tracks on the record, When The Sun Drowns In The Ocean.  This track is an instrumental other than the background noises of a woman moaning throughout the track.  What makes this the eeriest track on the album, however, is the what the woman's moaning actually represents.  The band themselves describes that "the audio is that of an old Irish funerary custom known as "keening" (from the Gaelic "caoineadh" - "to cry"). This was a vocal lament normally sang over the corpse of the deceased by an elderly women in improvised or pre-composed meter. The womans hair would be un-brushed and let hang down over the corpse to symbolise the disarray of death while expressing emotions of grief, loss, bitterness and love. Reference would be made to the deceased person's genealogy, deeds and character and curses could be uttered if there was an identifiable person to blame for the death."  Now that's pretty creepy, and pretty metal.

The last track of the album, All Life Converges To Some Center, could not be any better of a closing track.  It encompasses all the strengths of the album so far and just unloads it all on you one last time.  Everything from the blasting beats of Neptune Is Dead to the mesmerizing simplistic riffing of Feather and Bone are all accounted for here.  After this one's over, you may want to smack yourself  in the face to snap yourself out of the trance you'll surely be in.  You may think the final two minutes just generically fade out, but they do exactly the opposite.  They ramp up the tension until the album is ended with a final pounding of drums that is utterly brilliant and gives you one of those"wow" moments.

Through their consistent approach of creating an archaic/ancient sounding atmosphere by mixing together unrelenting heavy guitar sections with simplistic entrancing riffage and vocals that aren't holding anything back, Altar of Plagues have managed to give us something that can't described as anything short of amazing.  It's filled with raw emotion, energy, and what all atmospheric black metal should aim for, atmosphere.  This is one of those albums that you can't afford to not hear. 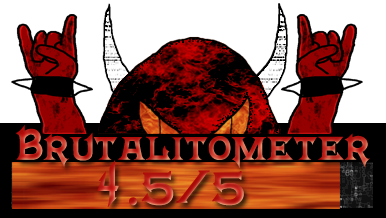 -Mick
Posted by Brutalitopia at 12:29 PM